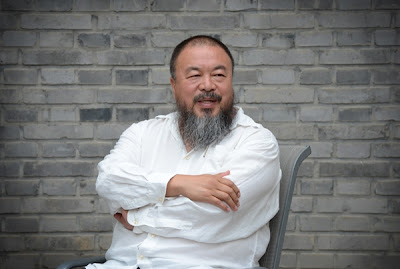 Following his Gangnam-style video, Ai Weiwei has written 9 metal-tinged tracks for his recording debut, with music by rock musician Zuoxiao Zuzhou, a friend who was questioned during the artist's 2011 detention. Two of the tracks are devoted to the blind activist Chen Guangcheng and another track is titled Climbing over the Wall, a reference to China's great firewall.

Ai told reuters that the idea for the album came when he was held in detention. “All I could sing was Chinese People's Liberation Army songs,” he said. “After that I thought when I'm out I'd like to do something related to music.” He also says Elton John has been an inspiration for making his own album and that he is already at work on a second album that is closer to John's oeuvre.
Image: Ai Weiwei