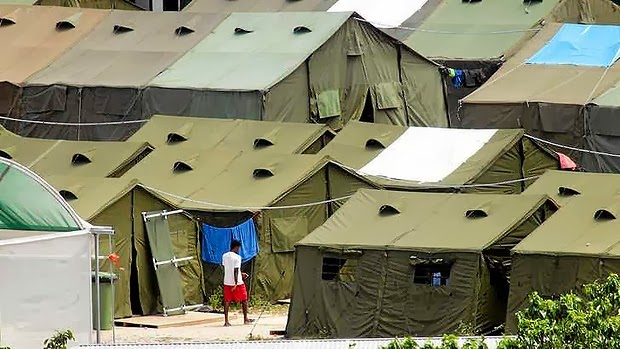 The 19th Sydney Biennale, You imagine what you desire, opened last week with a suite of launches at Cockatoo Island, the Art Gallery of New South Wales, The Museum of Contemporary Art, Artspace and Carriageworks, with most of the press focusing on the fallout from the artists' boycott.

The story so far…

35 artists (of the 90 taking part in the Sydney Biennale) write to the board expressing their concerns over primary sponsor Transfield Holdings link to offshore detention facilities for asylum seekers, presenting the Biennale with an unenviable choice: to bow to pressure from the artists and sever links with Transfield and the Belgiorno-Nettis family (the owners of the company), or remain loyal to the company, recognising its role as founding partner and longtime supporter of the Biennale.

The biennale board refuses to play ball and issues a statement of support for Transfield – and pledges its  loyalty to the Belgiorno-Nettis family, saying without their support the biennale will no longer exist.

Luca Belgiorno-Nettis resigns his position as chair of the biennale board “in the hope that some blue sky may open up over the 19th Biennale of Sydney” and the board severs all ties with Transfield.

All artists, bar Charlie Sofo and Gabrielle de Vietri, decide to re-engage with the biennale.

Arts minister George Brandis threatens to withdraw funding of the Biennale of Sydney for “blackballing” Transfield Holdings and writes to the Australia Council, which distributes funding on behalf of the federal government, asking it to develop a policy to penalise arts organisations that refuse funding from corporate sponsors on “unreasonable grounds”. He also says if he is not satisfied with the new policy, he will direct the Australia Council himself to force them to adopt a policy to his liking.

At the biennale launch at the Art Gallery of New South Wales, Guido Belgiorno-Nettis, president of the Gallery's board of trustees speaks for his family, condemning the actions of boycotters that led to his brother's resignation as chair of the biennale board. He also defends Transfield's role in the building and management of mandatory detention centres. “I believe Transfield Service will make a positive difference at Manus Island and Nauru”, he says. “Transfield has taken on tough challenges all over the world and has a strong reputation for professional and engaged service delivery.”

Throughout the opening week, curator Juliana Engberg treads a fine line, supporting both her pro-Belgiornio-Nettis board and protesters by speaking about the power of art to highlight injustices and the capacity of artists to propose alternatives and possible antidotes.

But many are left feeling the real villain (the Australian Government) has been let off the hook – that the privatisation of detention centre management through lucrative contracts with companies like Transfield has facilitated a calculated deferral of blame. Taking out Transfield hasn't solved the problem for the artworld. Future action needs to be aimed at the Australian government and its policy of manadatory detention for asylum seekers as well as its privatisation.
Image: Nauru Detention Centre