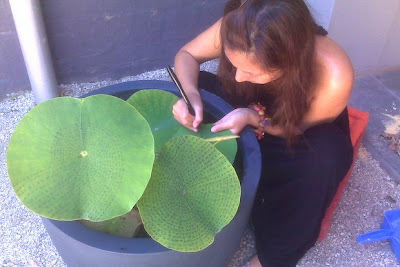 The downturn in the Australian art market has put an end to Deutscher and Hackett's plans to start a new high-end gallery in Gene Sherman's exhibition space in Paddington. Director of the auction house Chris Deutscher said: “Given the tougher environment for commercial galleries and the primary market, which has been pretty grim over the last 12 months, we thought it was a sensible decision to continue to run shows at Deutscher and Hackett rather than going to that bigger space.”

Gene Sherman had been set to follow the family's $2 million gift to the Sydney College of Art with two exhibitions a year in a new gallery to be completed next year. Now she will stay in her Goodhope Street space and show work from her 800-item collection of contemporary art in a series of curated exhibitions. She has been there for two decades, initially as a commercial space and since 2008 as a not-for-profit foundation.
Image: Charwei Tsai writing a Buddhist sutra on the leaves of a lotus plant at the Sherman Gallery, Sydney