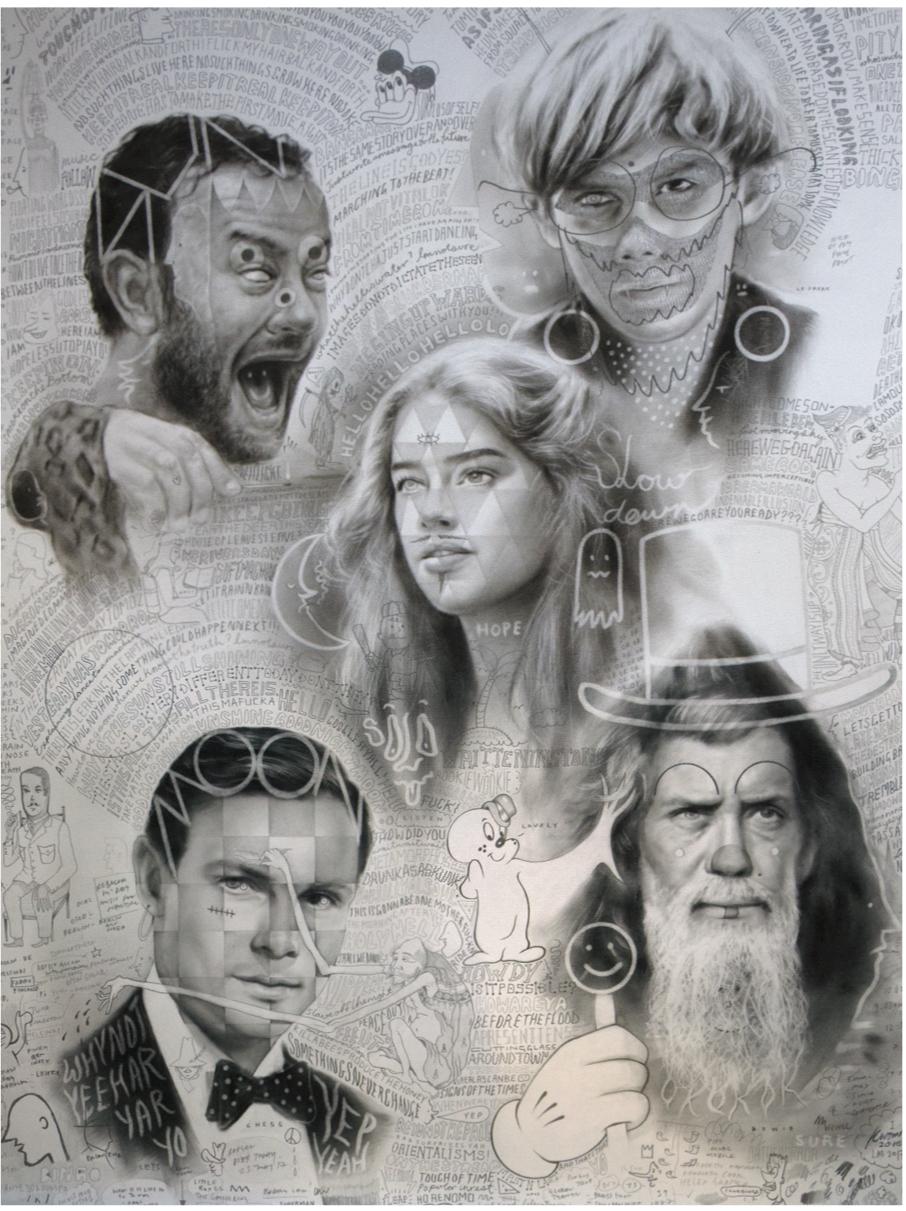 Starkwhite is pleased to present AM/PM/AM by Australian artist Laith McGregor from 9 May – 8 June 2019.

McGregor’s practice spans drawing, painting, sculpture, and video. For this exhibition at Starkwhite he presents new body of work continuing his research and exploration of the grey area between real and illusion. Presenting drawings, oils on canvas, found sculpture, and residues from the studio, McGregor evokes the curious and fictitious at every turn. Standing somewhere between the real and the subconscious, his practice takes shape from the narratives of film, literature, folktales, and lived experience. Blending the fictional and the real, characters and plot lines from these spaces come to life, cementing themselves into his personal language as motifs circulate through the new body of work.

McGregor’s celebrated drawings are intricate, fashioned by finely modulated mark-making using pencil or sometimes ball point pen. For him, creating a line is always the starting point for exploration within his wider practice, an expression of his belief that drawing is a fundamental form of human expression. He explains ‘The line as a symbolic gesture dates back to our primitive origins and has filtered into the fabric of everyday life. A primal instinct, the line is used to map, guide, express and converse, it is an immediate action that bridges consciousness.’ McGregor’s inquiry into the grey area between real and unreal has led the artist to a study of intuitive mark-making and the use of the subconscious as a means to guide, express, and perform spontaneous line-form arrangements and compositions. While drawing is the fundamental tenet of his practice McGregor engages with a range of materials and anchoring the exhibition is a six metre floor sculpture, its line and length representing a form of drawing for the artist also. Tracing out the international distress signal S.O.S. across the gallery floor, the sculpture is made with elongated shirt sleeves fashioned from Batik cloth. From each shirt cuff a disembodied silicon hand emerges, setting an unexpected tone that continues through the new body of work.

Alone Time (2018) presents five characters from castaway films in the foreground while behind them a mixture of words, phases, doodles, and icons form a sweeping backdrop. Like wandering thoughts expelled onto paper, uninhibited and automatic, they offer both disorientation and structure to the composition. Taken from films such as Robinson Crusoe, The Blue Lagoon, Lord of the Flies and Cast Away, the drawn characters capture a handful of the most common fictional identities or archetypes. Familiar plot devices to move narrative forward, character archetypes represent universal and age old patterns of human nature. They represent and speak to us, but are not us, much in the same way that Laith McGregor’s drawings are not always of himself but are continually autobiographical in some form. McGregor’s ongoing exploration of portraiture, identity, and artistic labour offers up aspects of his own life through his practice. Hung upside down a large drawing of Stan Laurel anchors one wall of the gallery. Politics (2019) references the Laurel and Hardy film Utopia, in which they set out for a South Pacific island, but instead wash up on a beach after a shipwreck en route.  Splitting his time between Australia and Bali, McGregor too lives on a tropical island and is familiar with the moments of disorientation and isolation, unexpected realisations, and questioning of personal identity that come from living in another place.

McGregor has regularly excavated his own lived experience for material, narratives presenting themselves in his practice frequently echoing the working through of his life and everyday existence on the canvas. Alongside the drawings McGregor presents a new series of paintings made using his recycled painting cloths and detritus from his working process such as pencil shavings and rubber gloves. Hung on top of drop-cloths from the studio, these small works begin with simple materials and build towards elegantly curious forms. As with the drawings, the elements begin to coalesce and to create a form and entity beyond their individual and oddly connected parts. Atop or occasionally beneath the small canvases are small wooden carvings. Brought by the artist in Bali’s markets these small and ubiquitous objects nevertheless operate in McGregor’s favourite indeterminate space, where reality is fluid and nothing is as it seems. Created in their hundreds for the tourist trade, the carvings begin life as mass produced objects, yet once purchased and taken home become special. As souvenirs of a holiday the ubiquitous has become precious, and the artist’s interest in the shifting ground between the sacred and everyday ignited.