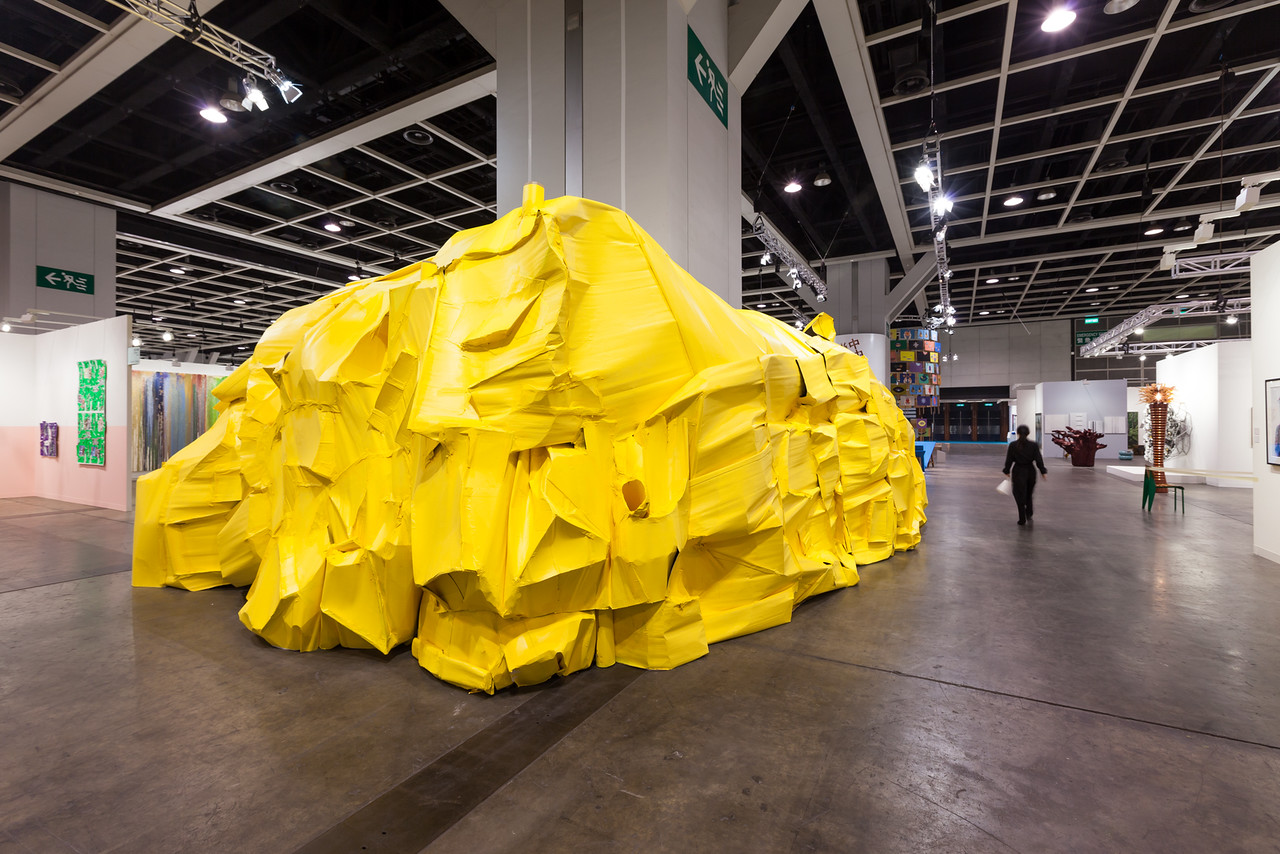 Auckland-based artist Richard Maloy will present a large-scale sculpture in Encounters, the curated section of the 2016 edition of Art Basel Hong Kong. Yellow Structure is one of seventeen works selected by curator Alexie Glass-Kantor (also the director of Artspace Sydney) for this high-profile exhibition in the fair featuring art museum-scale projects that are beyond the scope of booth presentations.

From a distance Yellow Structure appears to be a solid, monumental form – a golden rock-like sculpture that is formal and minimal in nature. It draws viewers in, where on closer inspection it reveals its humble, degradable construction of common industrial materials – cardboard, tape and paint.

Some viewers will see it as playful, while others may find the apparently wonky construction unsettling. All visible structural components are wrapped in cardboard and painted so the entire piece, even the posts and struts, appear to be made of light-weight cardboard – a monumental mass with no apparent signs of support, that could collapse or fall apart.

Some may reflect on the sculpture’s ‘green’ agenda seen in the use of recyclable materials and nod to mankind’s relationship with an increasingly precarious environment, while others again may respond to its formal properties and temporal nature and the way it engages and animates open space in the Encounters section of the art fair.

Commissioned by Starkwhite for Encounters, Yellow Structure is a development of Maloy’s earlier sculptural installations, notably Big Yellow which was commissioned for the 2012 Asia Pacific Triennial at the Queensland Art Gallery|Gallery of Modern Art in Brisbane.

We wish to acknowledge the generous support of Creative New Zealand and the Asia/New Zealand Co-commissioning Fund with the presentation at Yellow Structure at Art Basel Hong Kong, 2016

RICHARD MALOY BIO
Born in New Zealand in 1977, Richard Maloy is an Auckland based visual artist. Maloy completed a Masters of Fine Arts at Auckland University’s Elam School of Fine Art in 2001. He works in a wide range of media, including sculpture, photography, video and installation. He was awarded the inaugural Fulbright-Wallace award in 2009 and travelled to the United Sates of America as a visiting Fulbright Scholar in 2010 to take up a three-month artist residency at the Headlands Center of the Arts in San Francisco. And in 2008 he was awarded a three-month residency at Artspace Sydney. From 2009 onwards Maloy has produced many large scale cardboard constructions at public art galleries and Museums and for biennials and triennials throughout Australasia. More recently in 2013 Maloy exhibited All the things I did, an exhibition of artistic material from Maloy’s time as an art student. The work is part of a larger archive which includes over 5,000 items of Maloy’s art school material acquired by the Chartwell Collection and housed at the the Auckland Art Gallery Toi o Tamaki. Also in 2013 he was commissioned by the Auckland Art Gallery to produce a feature work for a survey show of New Zealand art for the gallery – a large scale Tree Hut, the sixth in his on going series started in 2004.