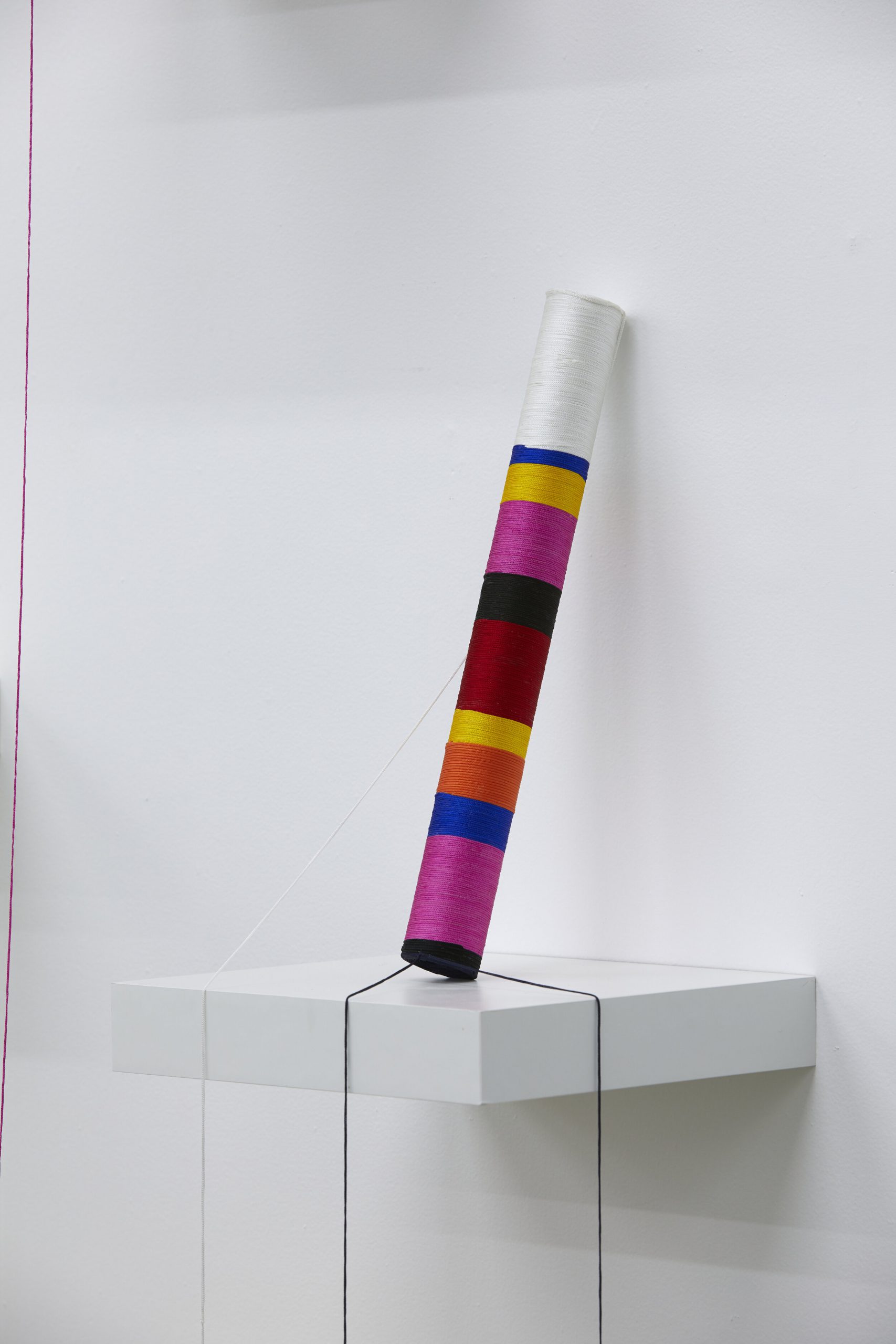 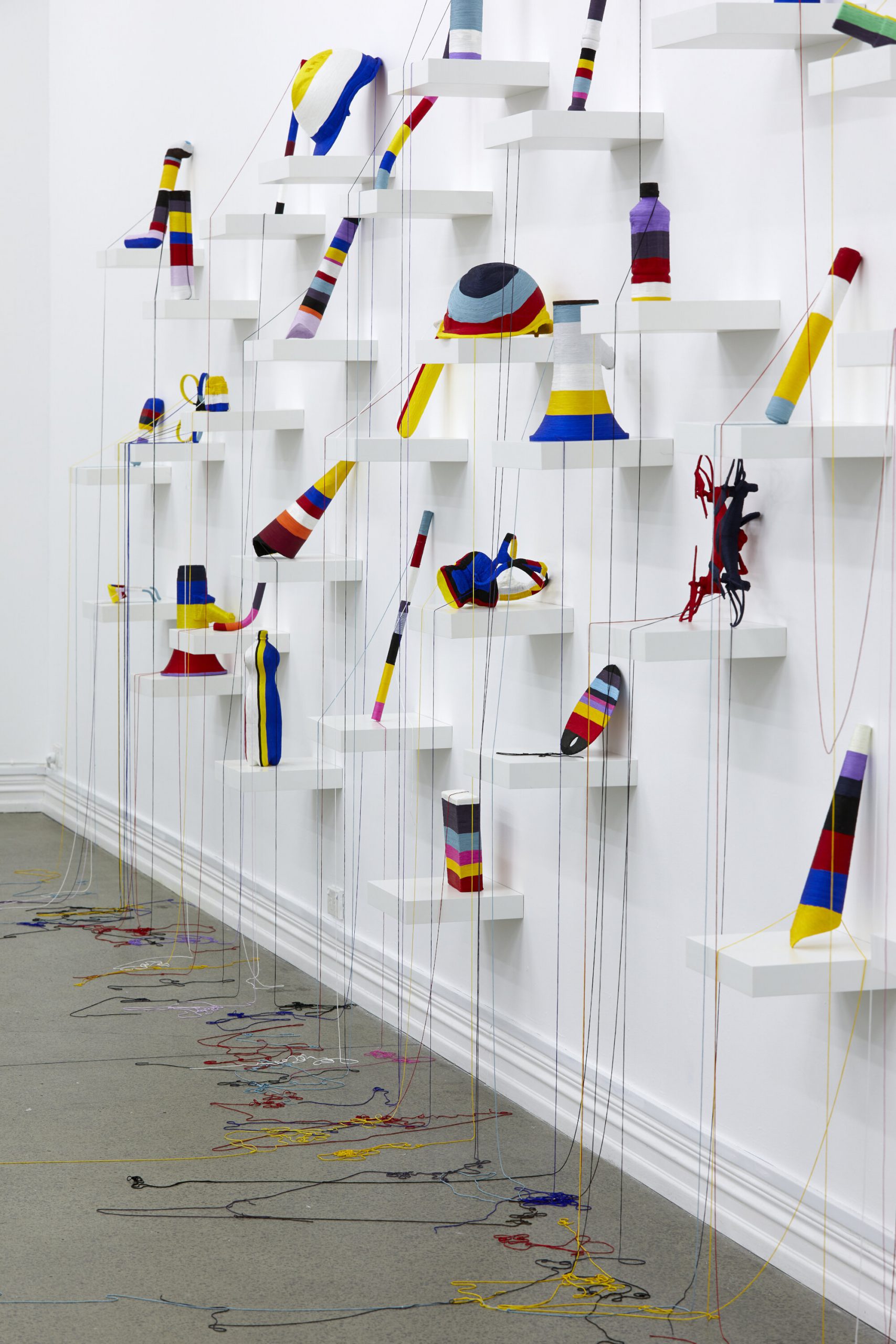 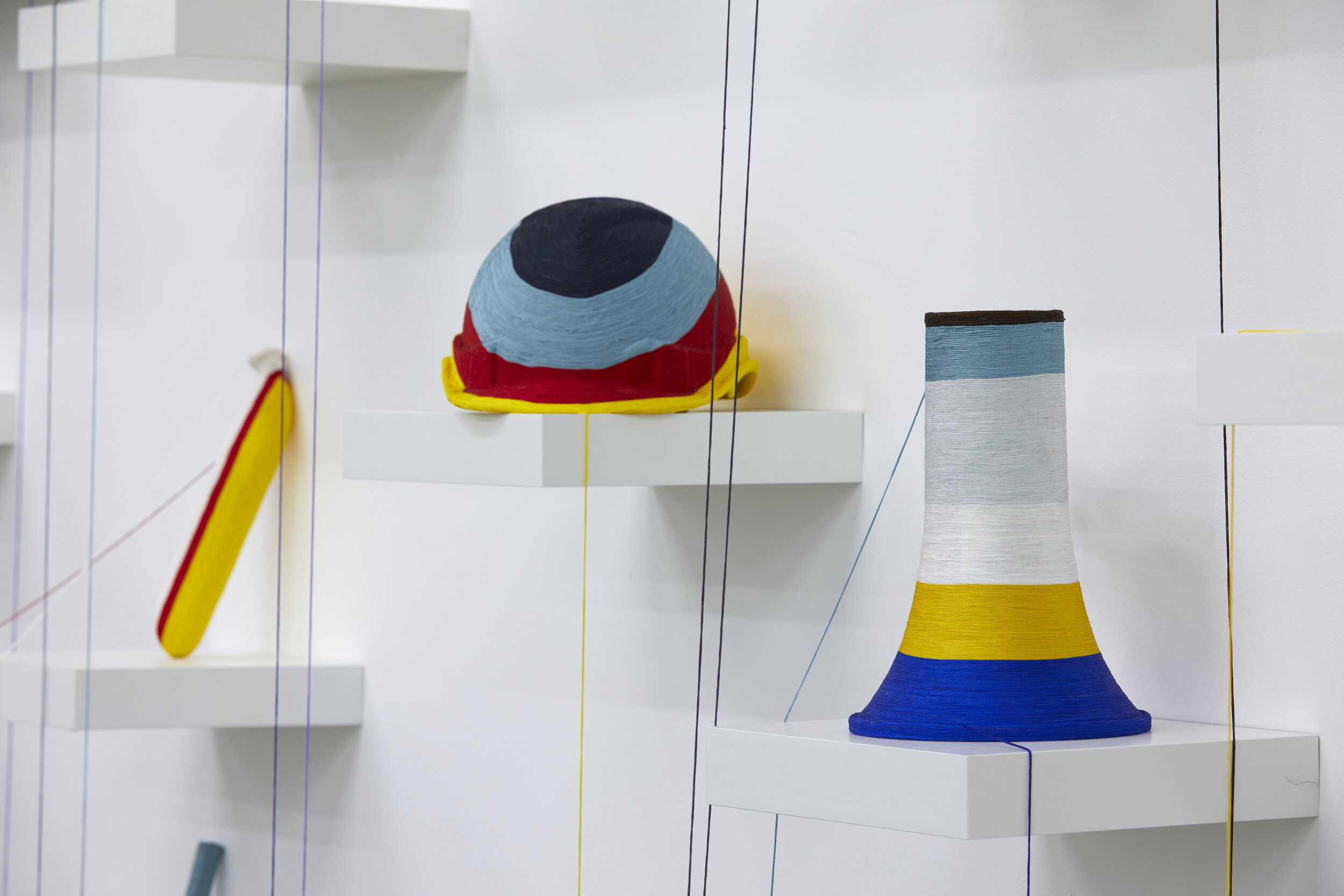 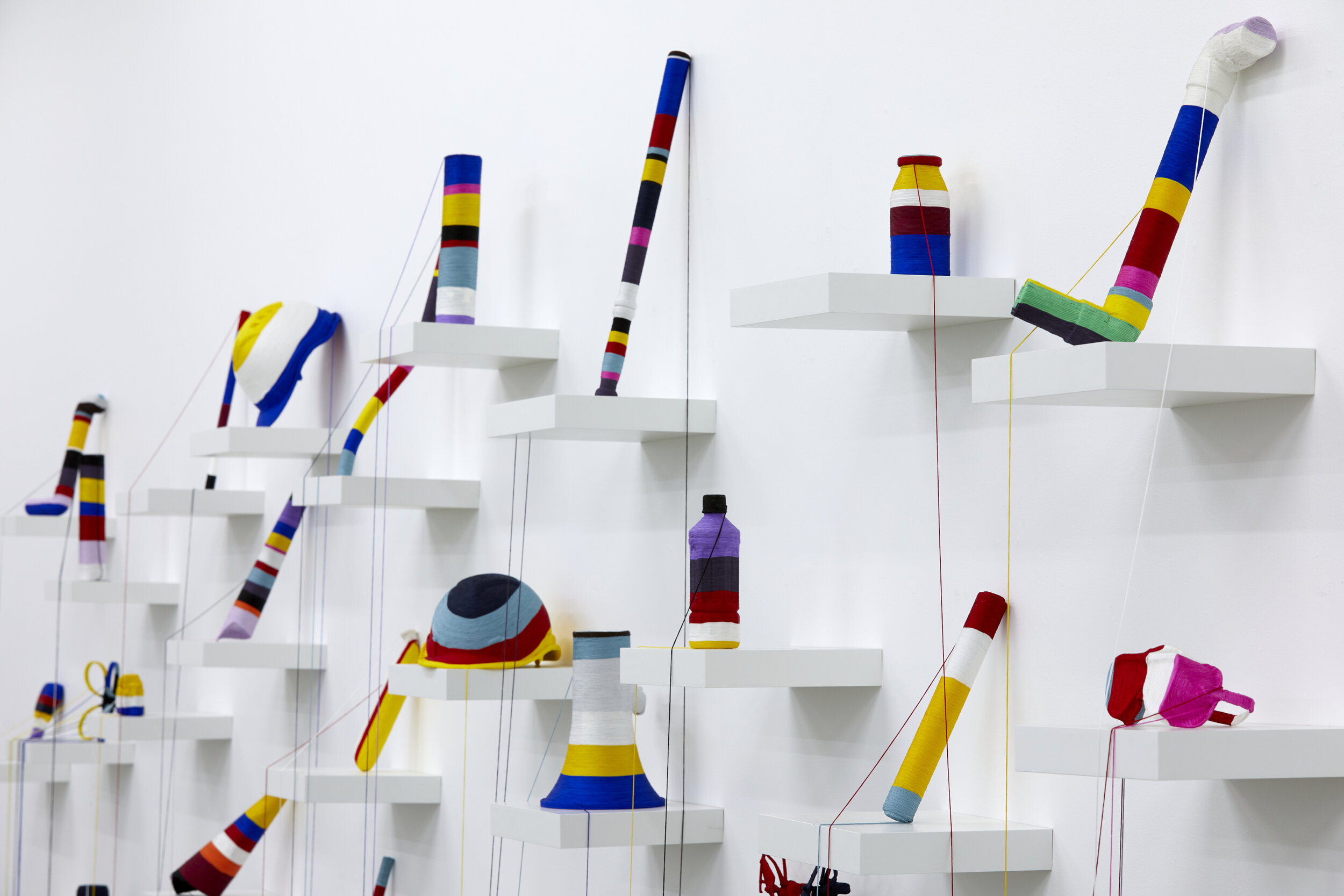 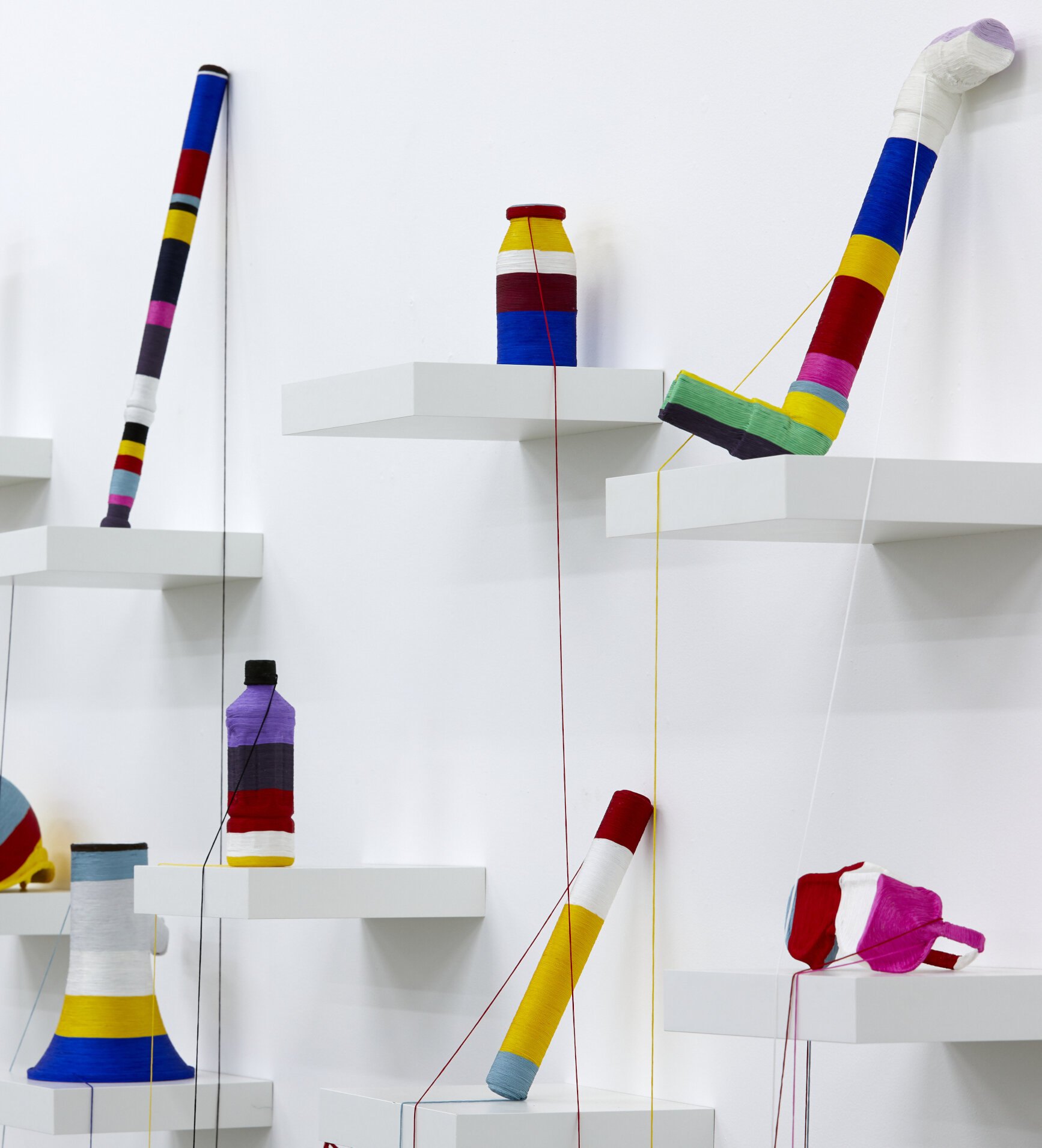 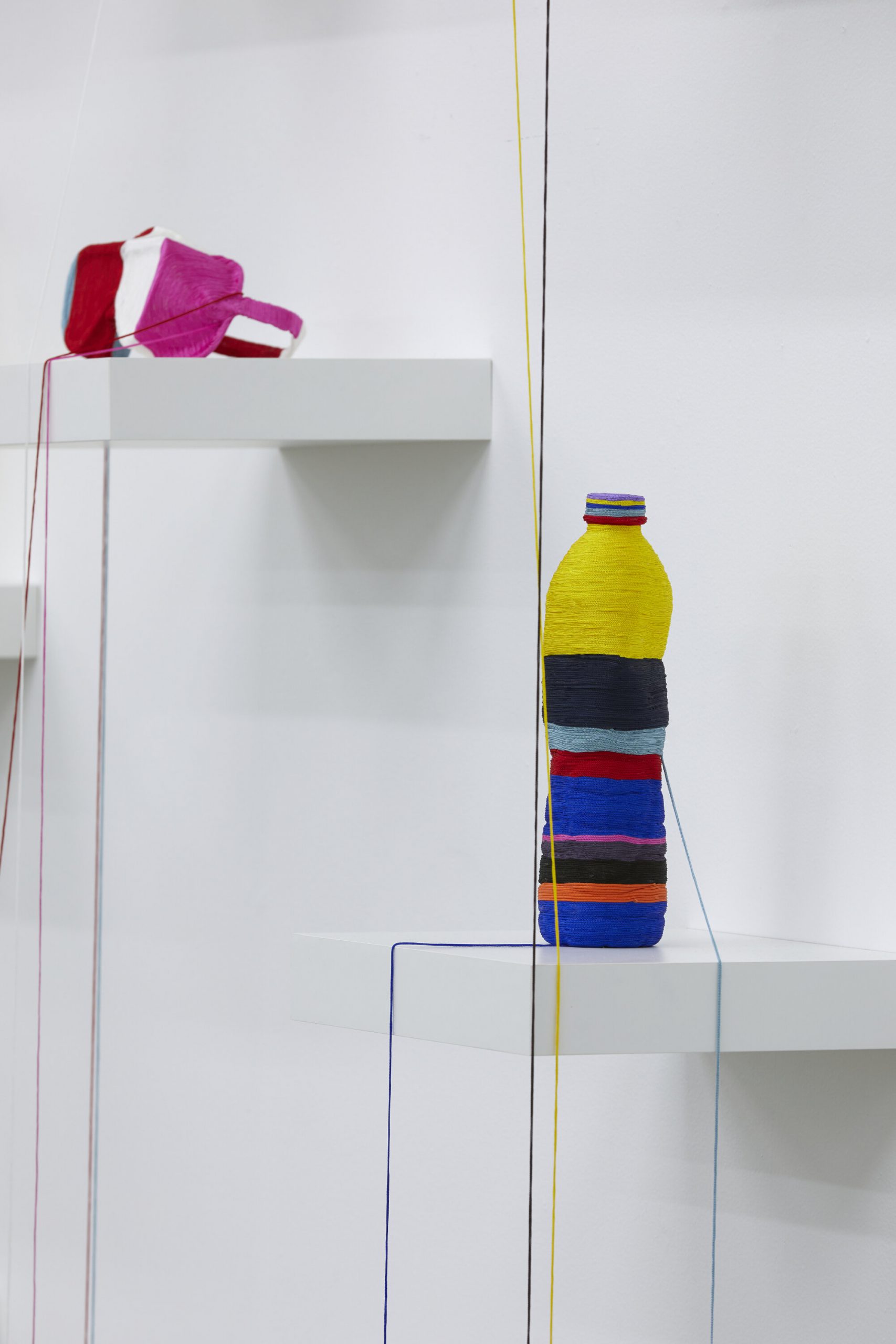 Note: The 2020 edition of Art Basel Hong Kong has been cancelled due to the outbreak of Coronavirus.

Starkwhite will present Yuk King Tan’s Crisis of the Ordinary in Encounters, the curated section of Art Basel Hong Kong 2020.

The artist will expand her 2019 installation of Crisis of the Ordinary at Starkwhite as a wall-based installation of objects on shelves, reflecting her ongoing interest in geopolitics, the effects of economic globalization and cultural influences – and how we deal with issues like freedom of movement and expression at a time when situations are changing quickly and dramatically.

The new Encounters work will be expanded from 40 objects in the Starkwhite exhibition to approximately 100, and this time presented as a floor-based installation. Objects bound in brightly coloured thread will be presented on units of metal shelving based on the shelves of haberdashery shops is Hong Kong’s Sham Shui Po district, but fashioned into a more minimal structure to create a pavilion-like, semi-open space in an Encounters hall, and offering an immersive experience for viewers.

The installation may read at first glance as artefacts in a museum-like setting or objects at a market, but a closer look will reveal them to be loudspeakers, batons, cameras, drones, bottles, books, canisters, etc of different shapes and sizes. The objects in Crisis of the Ordinary are the miscellanea of protest – objects from demonstrations and rallies across Australia, Hong Kong, Korea, New Zealand, Rarotonga and other places in the Asia-Pacific region.

The mass-produced objects that form the starting point of Tan’s sculptures are wrapped by hand in everyday thread, a process that changes both their reading and their form. Bound in the thin, satiny cord often associated with fashion or gift-giving, incompatible materials and methods have been brought together to create troubling items.

Both powerful and objects of power, these sculptures conceal and reveal. The colours of the thread relate to flag tones, markers of nationalistic pride. There’s beauty, but also the threat of what that beauty hides – the weapons and implements of protest and control. By making over the tools of suppression and resistance as sculpture, the purpose of the items has been concealed, raising the question: are they now impotent or simply wolves in sheep’s clothing?

Crisis of the Ordinary oscillates between blocking and shape-shifting. By transforming items both common and unusual in scenes of unrest and dissent and presenting them as a sculptural installation, Yuk King Tan reminds us that civic structure, public space, and indigenous rights are increasingly at the centre of political debate. The resurgence of marches and occupations in cities around the globe tells of the readiness of people to show support for a cause. When change is on the agenda in societies and issues are taken into the public realm, there are flashpoints, but there is also downtime.

Crisis of the Ordinary points to a space between action and reaction, where the ordinary exists and where conversation offers deeper connection, where the ‘crisis’ is not an end point, but a moment in an ongoing cycle of progress and change. Yuk King Tan locates in the ordinary the hope, creativity and humanity so often missing from media reports of unrest.

Currently based in Hong Kong, Yuk King Tan has had major solo and group exhibitions, most importantly at the Camden Art Centre in London, Ludwig Forum fur Internationale Kunst in Aachen, Museum Fredericianum in Kassel, Kunstverein in Hamburg, Museum of Contemporary Art in Los Angeles and Wellington City Gallery, New Zealand, Hong Kong Arts Centre, and Artists Space in New York. She has held residencies in Dunedin, New Plymouth, Queensland, Aachen, Sydney and London snd has participated in international biennales/triennials n Queensland, Vilnius, Auckland and Sao Paulo. She graduated in 1993 with a Bachelor of Fine Arts from the Elam School of Fine Arts, University of Auckland.