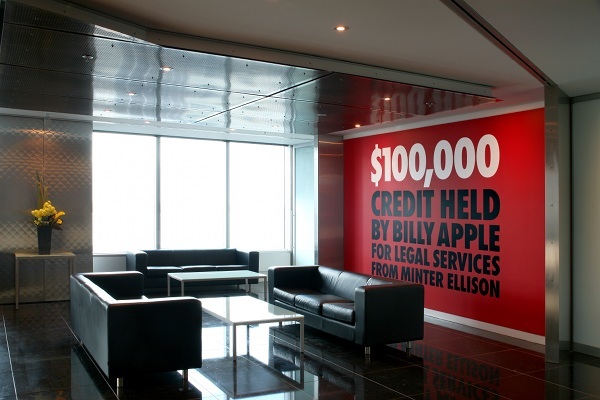 $100,000 Credit Held has since become a cornerstone work in Apple’s continuing series of transaction works, which describe and serve to contract the many and varied involvements of artworks in the process of exchange. Beginning with Art For Sale, 1981, with its focus on the artist’s core business, Apple’s transaction series has progressively and inventively extended its field of reference to cover all manner of everyday transactions, either under the general classification of the ongoing Paid, The Artists has to Live like Everybody Else series, or by individual arrangements (deals) whereby the artist receives, for instance, coffee, lunch or particular services, such as medical services or, in this case, legal services in exchange for works of his art.$100,000 Credit Held is a spectacular addition to Apple’s continuing transaction works, not just because of the monetary value it represents, or the explicitness of the brand exchange (‘credit where credit’s due’), but because of the importance of the work to the management of his transaction portfolio and his brand name.

After 5 years much of the credit had been used up and discussions took place, which led to the title of the 2011 Starkwhite show Billy Apple®: $23,610 Top Up. As is his way, Apple had calculated his need for further credit by reference to the Golden Ratio. The particular sum was an agreed upon golden section of the agreement calculated by reference to the Golden Ratio. The exhibition featured the $23,610 Top Up canvas, along with four artworks documenting the purposes to which the artist’s credit has been put. The artworks record the class of commodity for which Apple holds New Zealand trademark registration as a direct outcome of the advice and services provided by the Minter Ellison Rudd Watts intellectual propoerty team under the credit for legal services contract: Class 16 Printed Matter, Class 25 Clothing, Class 31, Fresh Fruit and Class 44 Orchard Services.

In the brochure published to accompany the exhibition, Wystan Curnow writes: “The significance of these two Top Up exhibitions for the management of Apple’s transaction and brand portfolio was attested to by the title of his 2009 double retrospective at Rotterdam’s Witt de With, a leading European Centre for contemporary art: Billy Apple®. Also that of its first part, A History of the Brand 1962 – 2009. As Michelle Menzies writes in her catalogue essay ‘At the moment of his name change he [the artist subsequently known as Apple] stopped being a person and became, instead, an aesthetic creation: an art thing whose most distinguishing feature is a requisite repetitiveness, the constant need to re-instantiate the implications of his own initiating act.’ The Top Up exhibitions contextualise another name change, one by means of which Apple re-instantiates himself as intellectual property and provides one of our most redoubtable and innovative aesthetic enterprises with a fresh injection of conceptual capital.”

The exhiibition runs to 24 August and can be viewed at the Minter Ellison Rudd Watts offices, Level 20, Lumley Centre, Shortland Street, Auckland between 9am and 5pm.

Billy Apple was created in 1962 as a work when Barrie Bates changed his name shortly after graduating from London’s Royal College of Art. His six-decade art career began in London amidst the pioneers of pop art but he moved to New York in 1964 where he exhibited in the legendary American Supermarket exhibition (which included Jasper Johns, Claus Oldenburg, James Rosenquist, Andy Warhol and Tom Wesselman) and then rapidly established himself as a key figure in the development of conceptual art. He exhibited in New York’s museum, dealer gallery and alternative art scenes (including shows at the Leo Castelli Gallery, Howard Wise Gallery and Bianchini Gallery) and established Apple, a not-for-profit space (1969 -1973). His subsequent text-based, works drew attention to art system relations between artist, dealer, and collector. He became a registered trademark in 2007, formalizing his art-brand status, which he has continued to explore through transaction-based works. He has had survey exhibitions at: The Mayor Gallery, London in 2010 (British and American Works 1960-69A History of the Brand and Revealed /Concealed curated by Nicholaus Schafhausen; and the Serpentine Gallery, London in 1974 (From Barrie Bates to Billy Apple 1961-1974). The artist lives and works in Auckland, New Zealand.

For further information on this exhibition and images please contact the gallery.