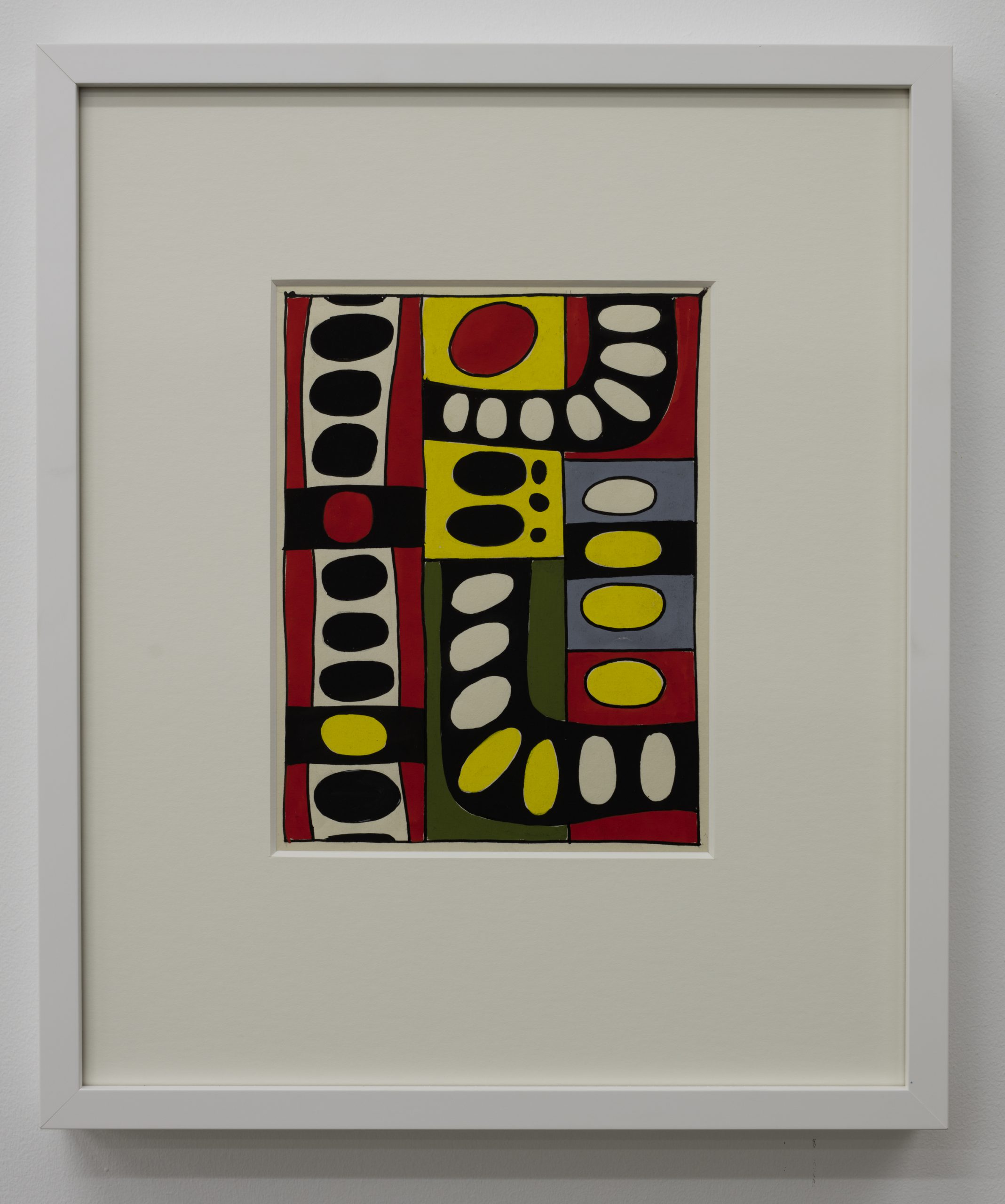 This exhibition has been curated for Starkwhite by Laurence Simmons, one of New Zealand’s foremost scholars on the work of pioneering abstract artist Gordon Walters. It is presented in partnership with the Walters Estate and with the support of the Dunedin Public Art Gallery where the Estate’s extensive holdings of artworks and archival material are being housed and cared for under a long-term agreement between the two parties.

There are three important sources that inform Walters’ gouache works, which were mostly painted over a decade at night while he worked for the Government Printing Office during the day. First of all, Walters had worked his way aboard ship to London in 1950. In 1951 on a continental excursion, he was exposed first-hand to the geometrical abstractions of Auguste Herbin, Alberto Magnelli and Victor Vasarely at the Denise René Gallery in Paris; and then the works of Piet Mondrian and Theo van Doesburg in The Hague, Rotterdam and Amsterdam. Secondly, into this heady engagement with European modernity upon his return to New Zealand Walters was to inject his prior interest in the field of Maori rock art. During the summer of 1946-47 he had worked closely alongside Indonesian expatriate Theo Schoon recording Maori rock drawings in the limestone bluffs and shelters of South Canterbury, places which Schoon majestically described as ‘New Zealand’s oldest art galleries’. The rock-art depiction of human and animal figures with blank centres inspired the geometry and interlocking structures of stylized anthropomorphic figures that were to appear later in many of Walters’ gouaches. Thirdly, in 1953 Schoon had also introduced Walters to the work of Rolfe Hattaway, a permanently hospitalised psychiatric patient whose drawings made with a lump of clay on the asphalt of an exercise yard had captivated Schoon when employed as an orderly at the Avondale psychiatric hospital. Schoon provided Hattaway with art materials and later he and Walters copied Hattaway’s loopy tumults of line, in particular the repeated motif of a long open rectangle penetrated by a curving snake-like form. The importance for Walters of this positive form penetrated by a negative emptiness was now confirmed for him from an arresting double source: rock art and outsider art. These two tours de force dramatise the radical aesthetics of Walters’ fifties gouaches that willfully blur the differences between abstraction and nature.

Walters’ rapid study gouaches of the 1950s called for a certain tenacity of purpose, sustained analysis and prolonged concentration. They yielded a surprising narrative of astonishing range, providing images and compositions that would carry Walters through the decades to follow. Years later he was still using motifs he had stored in his visual memory from the fifties. For the paradox remains that in such an elaborated intellectual practice of painting as Walters’ so many of the key effects and decisions are derived from moments of pure coincidence and inspiration. Walters’ best works of this period are permanently embroiled in the present tense of their making; they would be just as fresh as if created today or tomorrow.

Gordon Walters is best known for his paintings employing the koru, the curving bulb form from Maori moko and kowhaiwhai rafter patterns. He is a revered figure in New Zealand, recognised for a long and productive career spanning four decades. The Auckland Art Gallery Toi o Tamaki presented a retrospective exhibition his work in 1983 and a survey exhibition Parallel Lines in 1994, and he has been included in many survey shows, including A Very Peculiar Practice: Aspects of Recent New Zealand Art at the City Gallery, Wellington. In 2014 Starkwhite and the Walters Estate presenteda small survey show of his koru paintings at Art Basel Hong Kong. Walters is represented in the country’s major public collections and his place in our art history is memorialised in the bi-annual Walters Prize exhibition and award at the Auckland Art Gallery Toi o Tamaki.

Laurence Simmons is Associate Dean (Postgraduate) and Professor of Film Studies in the School of Social Sciences at The University of Auckland. He has written extensively on contemporary New Zealand art and photography and his latest two books are Tuhituhi (2011), on the painter William Hodges who journeyed with Captain James Cook on his second voyage to the South Pacific, and Blutopia (2014), on the artist John Reynolds.