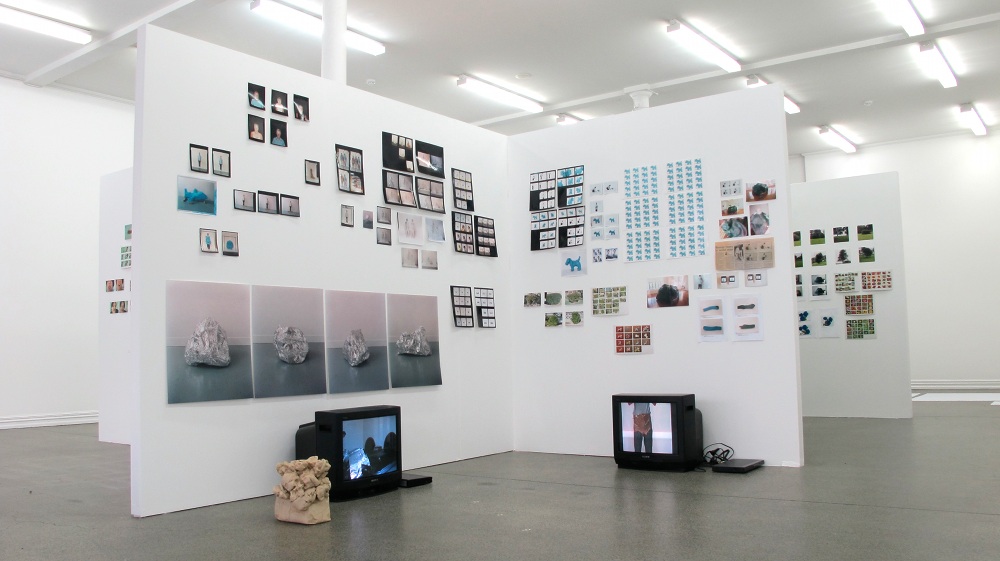 Starkwhite is pleased to present All the things I did by Richard Maloy, a project developed with the support of Creative New Zealand, from 4 – 30 November 2013

Richard Maloy’s first solo exhibition at Starkwhite consists of a suite of studio spaces typical of Western art schools in recent times. A closer look, however, reveals this to be a recreation of Maloy’s own student spaces, each displaying examples of his student work between 1996-2001, which he retained as an archive. No stranger to creating structures and installations that offer playful and sometimes awkward encounters, All the things I did is a self-styled history of sorts, or memoir of turning points in the artist’s early career.

With its partitioned walls and art school studio tables displaying photographs, videos, text and objects, Maloy offers a stage on which to present his archive as an artwork. Never intended for viewing outside the confines of the art school environment, it now reveals how Maloy and his contemporaries were influenced by the art school paradigm and contemporary teachings. All the things I did acts as an archive of a student’s work within a western arts education system as the world moved from the 20th into the 21st century.

The installation also highlights his development as an artist and re-conceptualises his current practice, presenting a new framework to see both within. The reworking of his back catalogue in this way offers a fresh insights into works such Big Yellow, a two story high yellow mass with interior space commissioned by QAG|GOMA for the 2012 Asia Pacific Triennial, and the video piece As Many Structures As I Can (2008) in which Maloy begins with a pristine set of building blocks made from butter and reworks and manipulates them endlessly with his bare hands until the material collapses into a formless abstraction of texture and colour.

The approach to a more formal engagement with existing material that All the things I did presents also echoes recent projects,such as Attempts (2010). Eliciting a surprising lyricism that echoes an Abstract aesthetic, the series of photographs utilises thedebris of fine art students’ production process as their subject matter. Maloy is not one for indulging or strengthening the canon, however, his usual style is to evoke then quickly destablise it, employing unlikely materials and processes to create a diverse body of work that acts as a type of private action or intention made public.

In 2009, he was awarded the inaugural Fulbright-Wallace Award, which allowed him to spend five months in California in 2010 as a visiting Fulbright Scholar, and undertake a three-month artist residency at Headlands Center of the Arts in San Francisco.