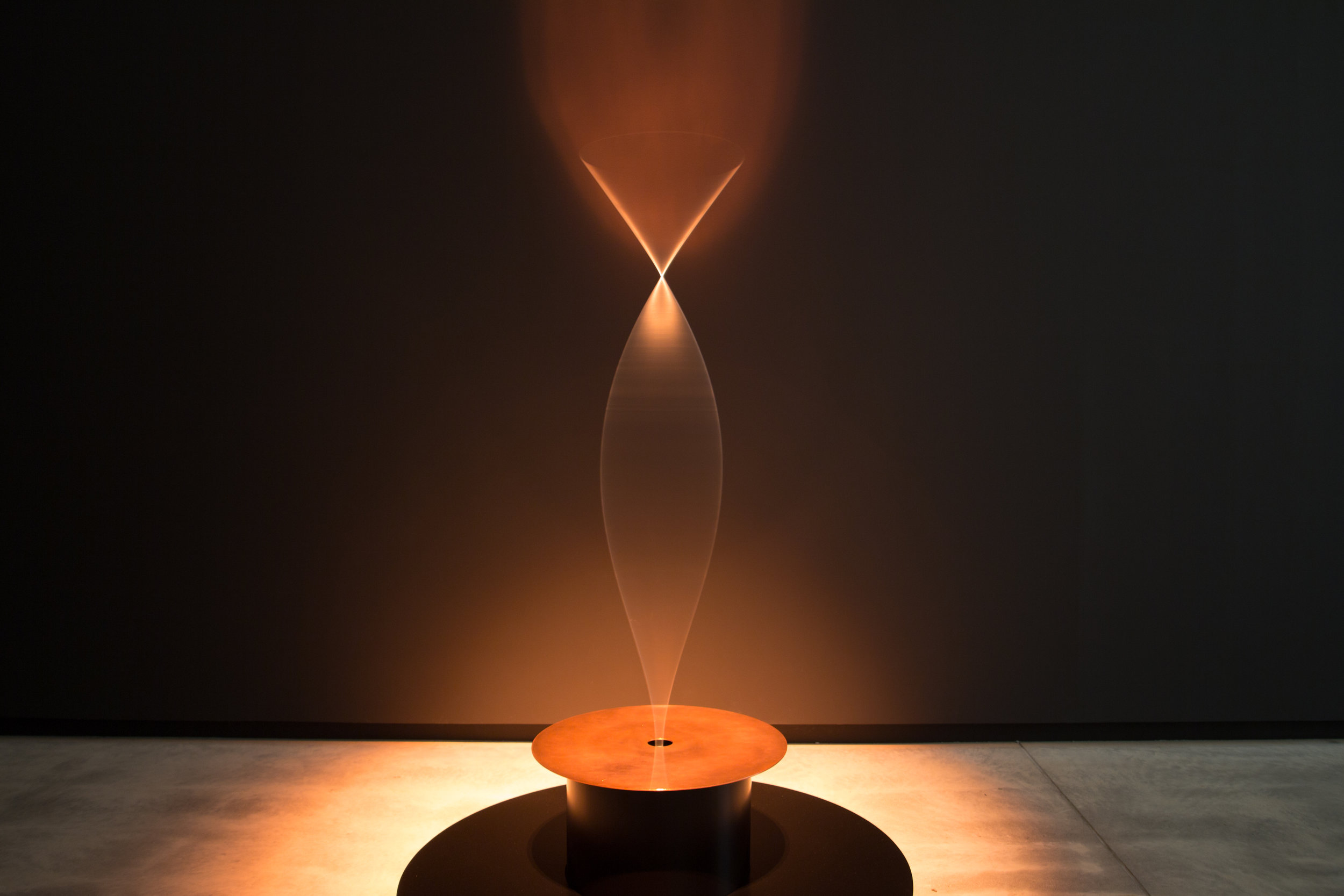 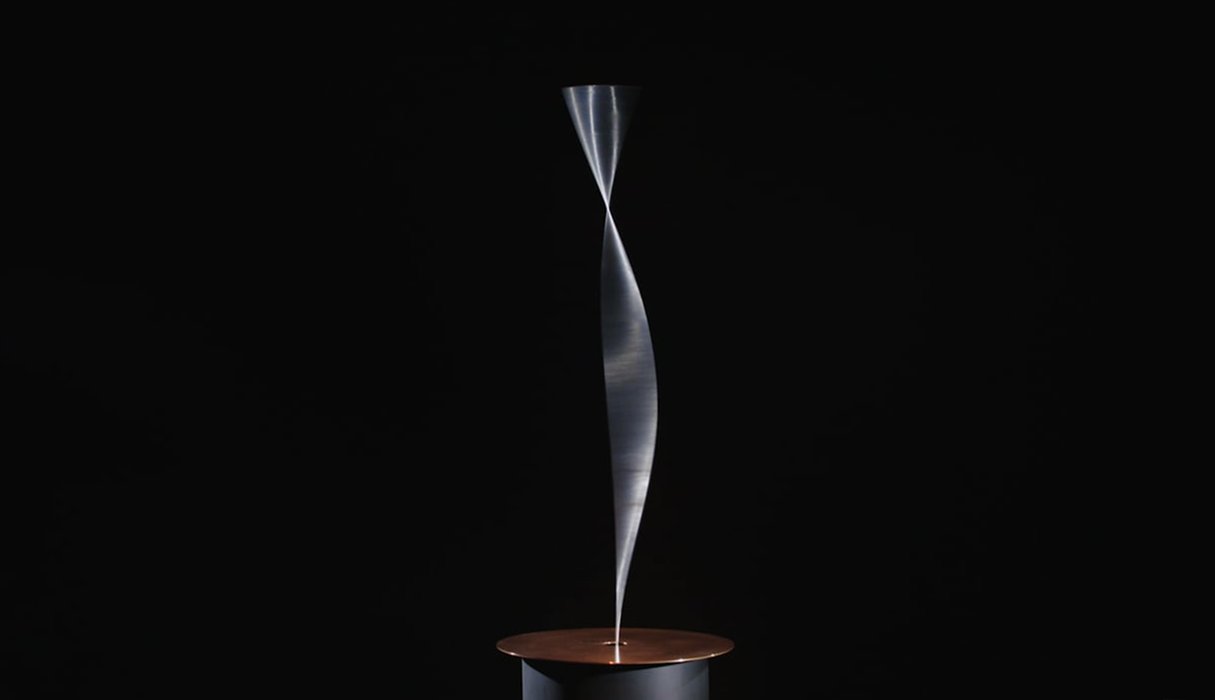 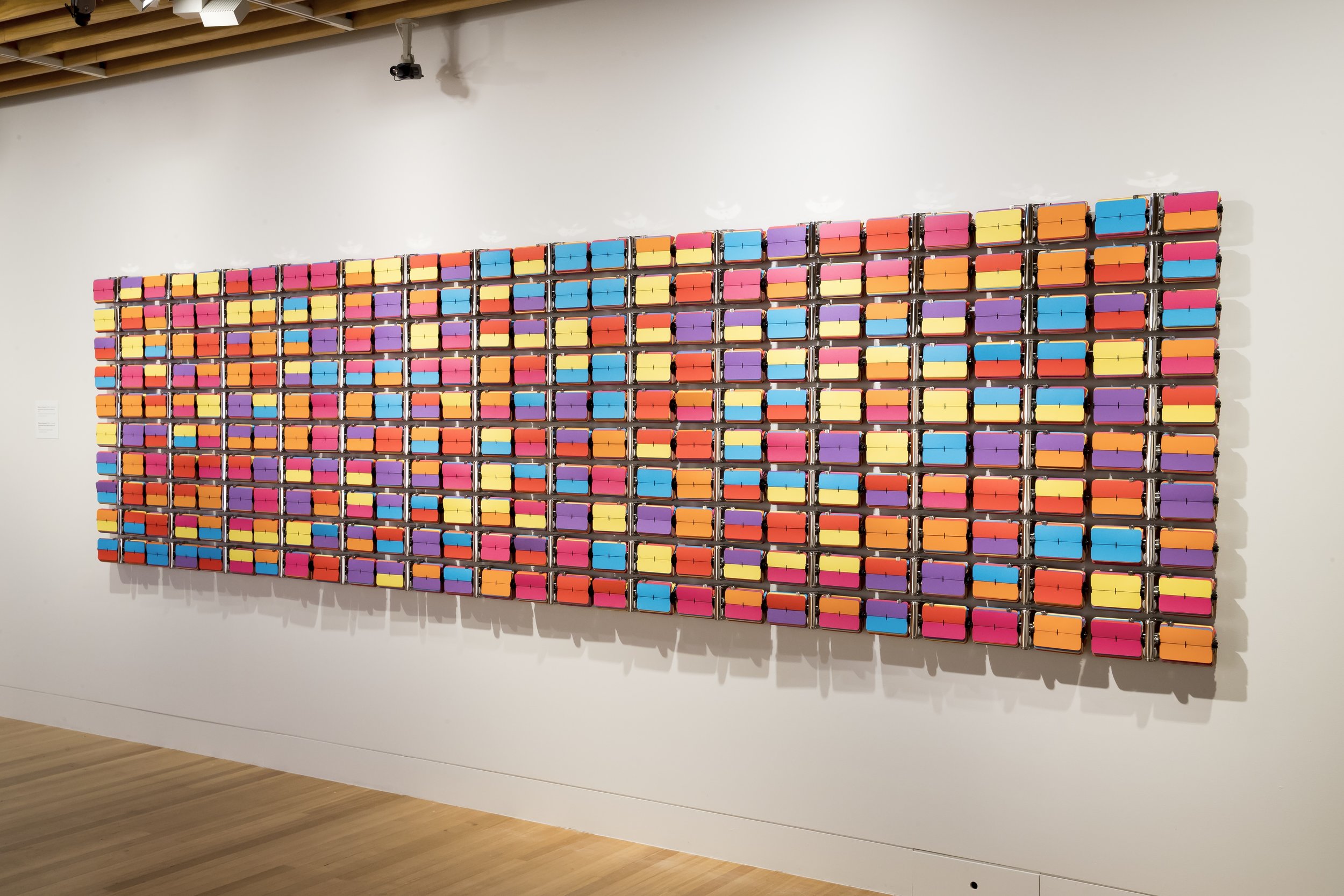 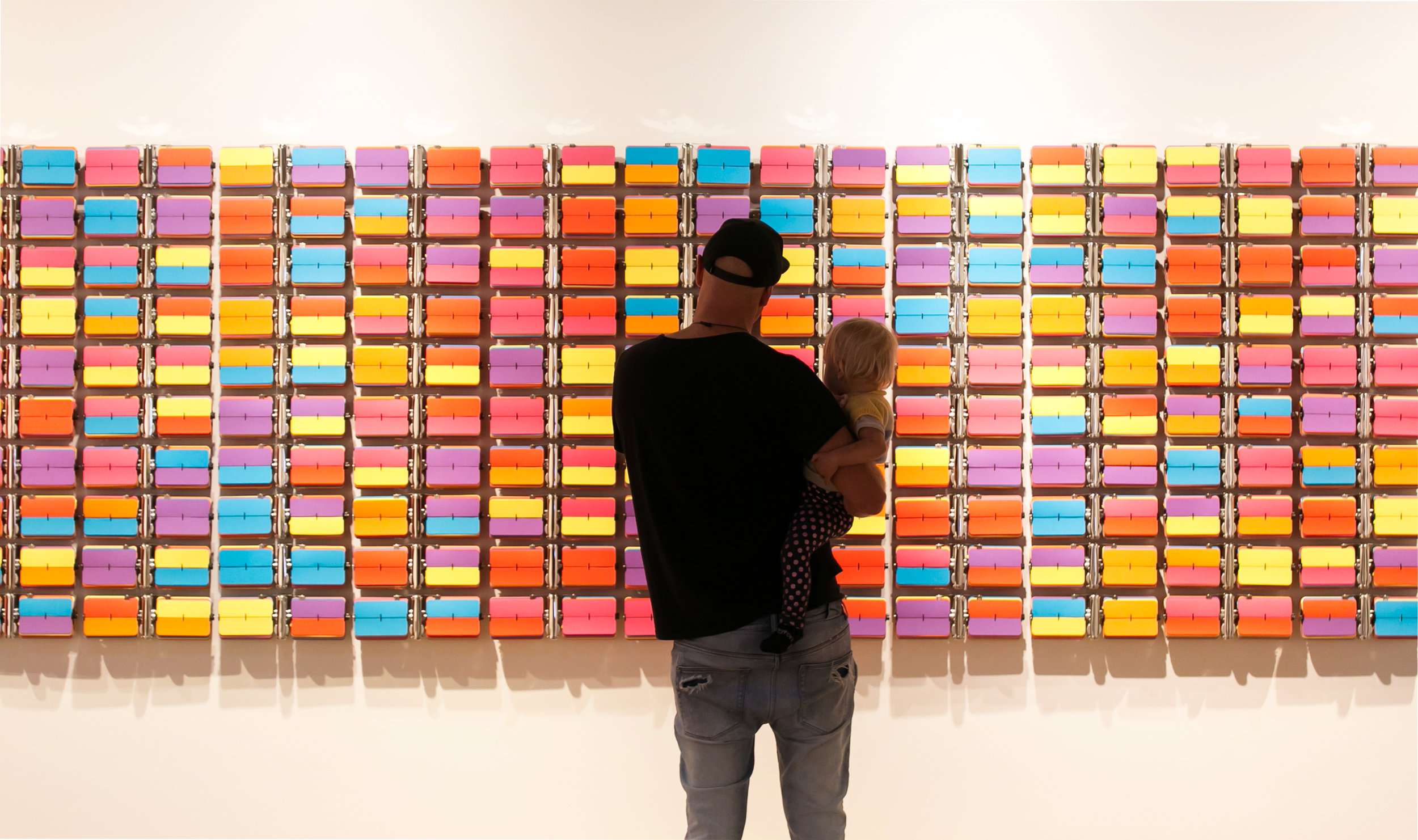 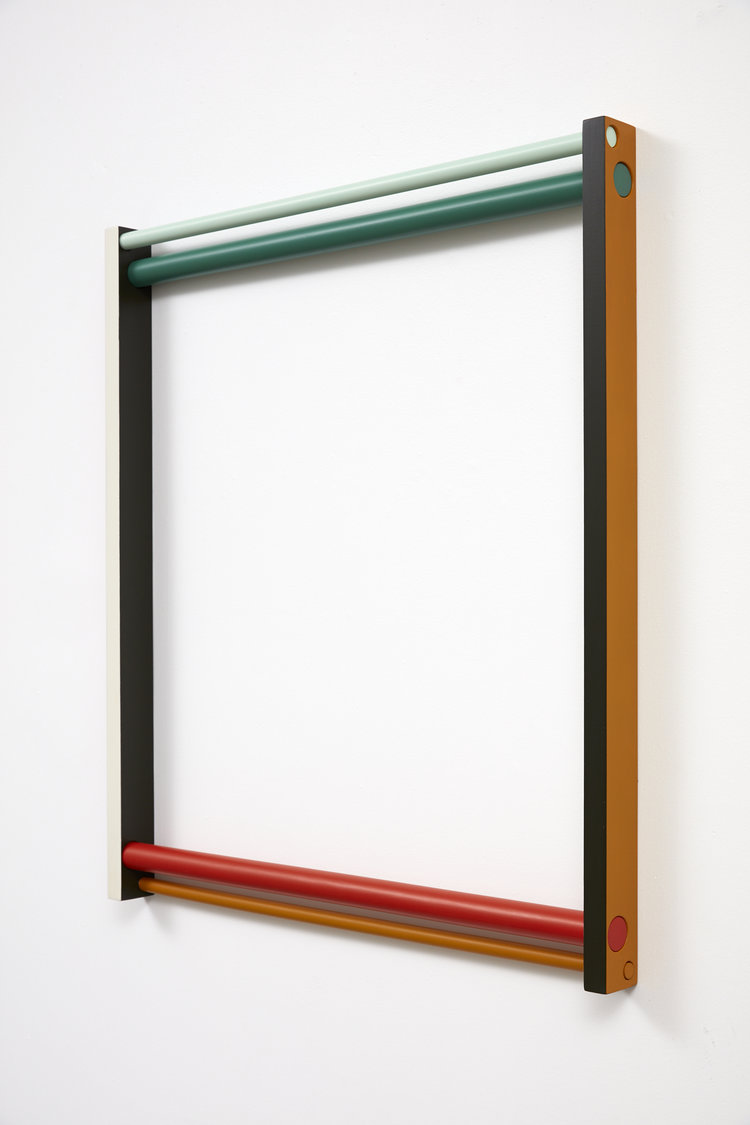 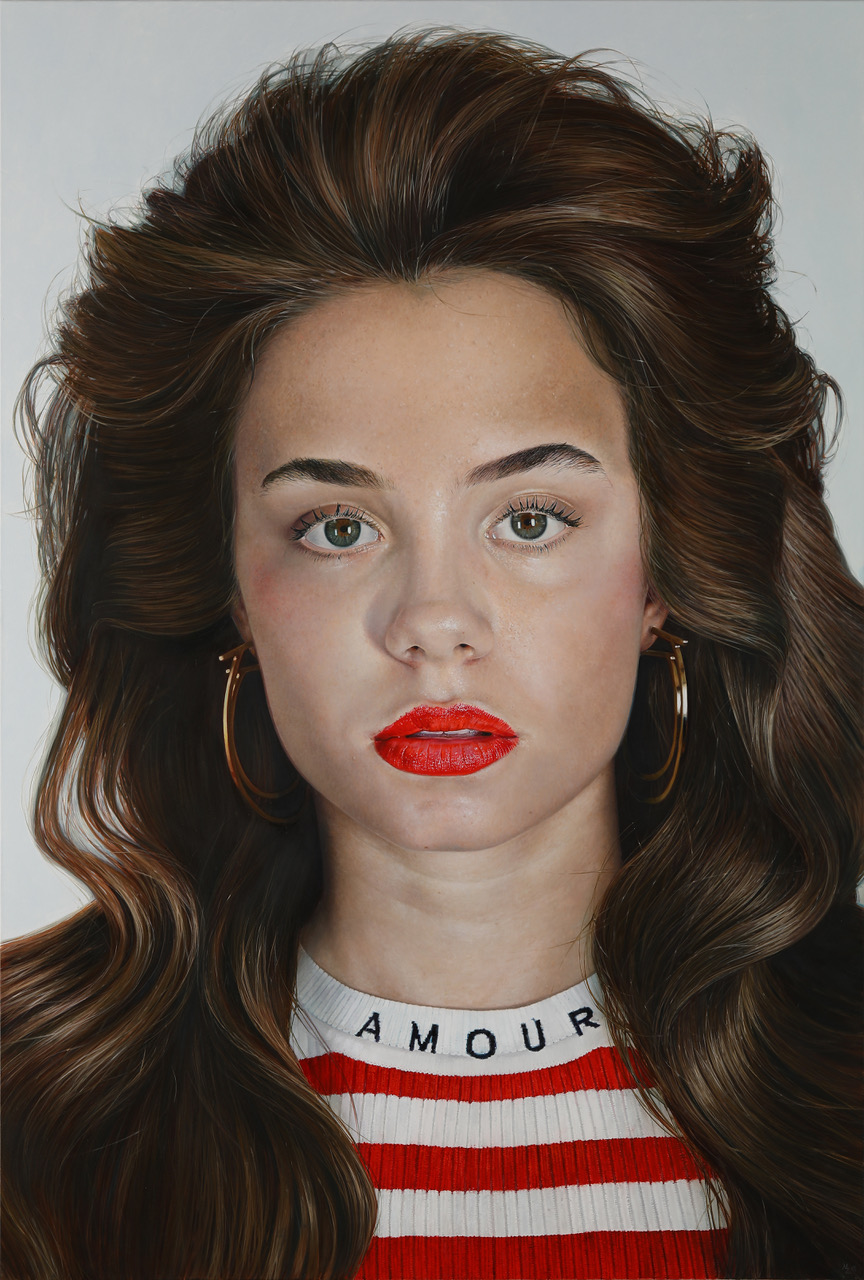 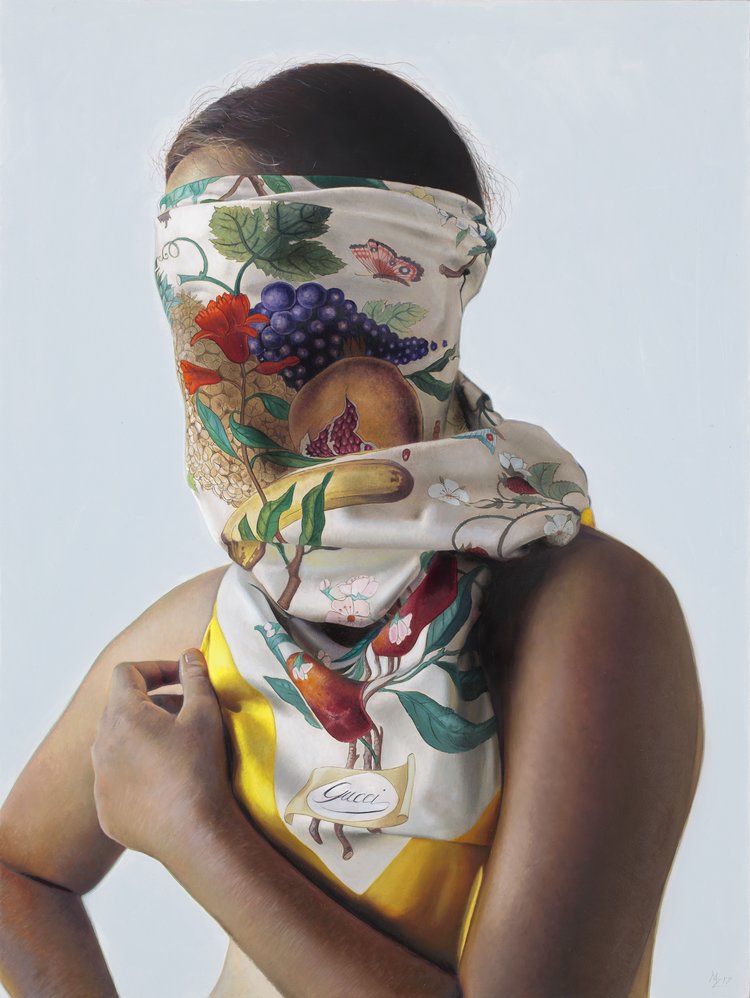 New Zealand born artist Len Lye (1901-1980) is recognised internationally as a pioneer in the field of experimental film and kinetic art. He spent his career pursuing the “art of movement” with film where he pioneered direct filmmaking (films made without a camera) by scratching or painting directly onto celluloid film. Our presentation will focus on his kinetic work with two key sculptures – Rotating Harmonic (1959) and Roundhead (1961). Rotating Harmonic is one of Lye’s classic works. From one simple steel rod, Lye coxes the fundamental principles of harmonic motions that underlie his work. ‘Well, I found I could spell out the whole business of energy being absorbed…in this carbon steel (rod).” Roundhead is one of the the artist’s most delicate kinetic sculptures comprising four concentric circles that spin in space, with a sparse ambient sound track. The works are from the the Len Lye collection and archive held in the Len Lye Centre in New Plymouth, which is New Zealand’s first art museum dedicated to a single artist.

Rebecca Baumann explores the relationship between colour, light and time in her work, notably in her ongoing series of automated colour fields. The ACFs consist of grids of split-panel flip clocks, each with the number cards replaced with cards of solid colour. The result is a vast and affecting (and constantly changing) field of colour. Like changing numbers on a clock, the cards flip on each clock on the minute (on the right hand side) and on the hour (on the left hand side) – revealing the endless combinations of the palette. The title of the automated colour field works, and its link to the Gerhard Richter’s colour-chart series, points to a connection with painting. Yet while Baumann draws from an understanding of the art historical role of colour, her focus remains a study of how colour elicits emotions. We will present her latest variation, which is also her largest to date. Automated Colour Field (Variation 8) measures 1290 x 5030 x 90 mm, produced as an edition of three. The first work in the edition was acquired by the Museum of New Zealand Te Papa Tongarewa and is showing their current exhibition Toi Art .

Seung Yul Oh is well known for whimsical art works that toy with scale, but running parallel to these playful art works is Oh’s painting, a formal and sometimes minimalist practice, which the artist has described as ‘musical’ and offering moments of balance and counterpoint. We will present new works from his Horizontal Loop series where he continues his practice of working the edges, expanding on previous examples and moving away from conventional focus on the canvas. Suggestive of architectural features such as doorways or the front of a building, there are now are only four elements: simply open space framed by painted wooden bars. Made from cylindrical rods and rectangular sections of timber, these works exist as an outline of form. Here, the absence becomes content. He also exploits the expressive power of colour in this series. Oh’s reductionist and geometric compositions allow both vivid contrast and subtle nuance of tone. “I’m interested in the relationship between colours, how they sit side by side, the tension or rhythm they create. There’s uncertainty when these colours are joined. This clash, or harmony, generates a dimension of dialogue when they’re placed next to each other” he comments.

Michael Zavros paints beautiful things beautifully. His subjects include European palaces, gardens and follies; up-market men’s fashion, flowers, luxury cars and jewellery; Lipizzaner dressage horses and Japanese pedigree onagadori chickens. Increasingly the artist is turning his gaze inward, to home and self, making work that engages with beauty and the culture of narcissism. The Zavros lifestyle is depicted and documented in his art. He paints what he appears to have become – a poster boy for a life perfected. He lives an outwardly perfect life, perfectly groomed for lifestyle magazines and shared through social media – he has 95,000 followers on Instagram. Zavros’s artworks present at first glance as perfectly rendered photo-realist painting, but they generate readings and responses beyond the surface affect. They underscore contemporary society’s obsession with beauty and vanity. Like advertising, what is being created in a Zavros painting is not so much an object, a type of physical thing, but rather an artificial need or desire. “It is part of the function of narcissism — the aim of narcissism,” writes psychoanalyst Adam Phillips, “to expose by provocation the narcissism of those with whom it comes into contact.” Our presentation at Sydney Contemporary will include a new large-scale painting of his daughter Phoebe, which is quite unlike earlier portraits in his ongoing Phoebe series, and a new still life painting.

Recognised internationally as one the twentieth century’s great modernist innovators, New Zealand artist Len Lye is most famous for his avant-garde experimental films and for his astonishing and playful kinetic sculptures. Always fascinated by the interplay of movement and light, this extraordinary artist also expressed himself in photography drawing, painting and poetry.

During his lifetime he was better known in the art capitals of North America and Europe than in the country of his birth, but that has changed since the establishment of the foundation dedicated to his works at New Plymouth’s Govett-Brewster Art Gallery and particularly following the opening in 2015 of the Len Lye Centre, New Zealand’s first art museum dedicated to a single artist.

Born in Christchurch in 1901, Lye became one of the first modernists in New Zealand. Growing up in the South Pacific region gave him a different set of interest from modern artists overseas. For example, he studied Maori and Aboriginal art ad Pacific tapa design.

From 1926 to 1944 Lye was based in London where he made paintings and batiks and became a member of the 7&5 Society, a leading group of avant-garde artists including Ben Nicholson, Henry Moore, Barbara Hepworth and Francis Hodgkins. Lye also became a member of the Surrealist group and was included in the famous International Surrealist Exhibition in London in 1936. What made him famous, however, were his animated films. He pioneered a new method of ‘direct filmmaking’ and became a leading experimenter in the new medium. His first direct film, A Colour Box (1935) won awards ands had screenings all over the world.

From 1944 to his death in 1980, Lye was based in New York where he helped to create an experimental film scene and made some striking new films such as Colour Cry and Free Radicals, but getting his films funded or distributed was such a battle that he turned his attention to the making of kinetic (motor driven) steel sculpture. From 1988 on he did innovative work in this form of sculpture, which was closely related to his films – both are expressions of his lifetime aim of creating a new “art of motion.” Lye’s approach was a new because, whereas most European kinetic artists were influenced by Constructivism with an emphasis on geometrical forms, Lye’s sculpture tended to be based on the body and natural forms. Despite its use of metal and motors, it created a strong sense of physical empathy.

From the 1960s, Lye had increasing contacts with New Zealand artists. He made return trips to the country in 1968 and 1977 he worked with a New Plymouth team lead by John Matthews to build sculptures for display at the Goveett-Brewster Art Gallery. He was so pleased wth the results that he decided to leave his collection of art to the people of New Zealand to be housed at the Govett-Brewster Art Gallery under the supervision of the Len Lye Foundation. Through the recent creation of an architect-desinged Len Lye Centre, his work is permanently on display in New Plymouth.

Since his death there have been major exhibitions of his work overseas museums such as the Centre Pompidou and the Australian Cetnre of the Moving Image. When a new national art museum for Germany – the Kunst und Ausstellungshalle der Bundesrepublik Deutschland – held its opening exhibition 1n 1992, it presented its selection of the hundred most original artists of the 20th century. Lye was represented by his sculpture Universe and by his film A Colour Box.

“There is something intensely joyous in Rebecca Baumann’s artworks, celebratory moments of colour and action and curious puzzles that can, intriguingly, never be solved,” says critic John Barrett-Leonard. “She mixes intense colour, simple mechanical devices and moments of time, or perhaps moments out of time, in creating artworks that use colour and motion to point within, at a complex and varying field of emotion and experience.”

She has been the recipient of a number of residences in New York, India, Berlin, Dunedin and most recently Finland.

Born in Seoul, Korea in 1981, Seung Yul Oh moved to New Zealand to complete an MFA at Auckland University’s Elam School of Fine Arts. He now divides his time between Auckland and Seoul.

Oh was the recipient of the SEMA Nanji Residency, Seoul Korea (2013); the 2011 Harriet Friedlander New York Residency Award administered by the Arts Foundation of New Zealand; and the ggool Residency Seoul, KR (2010)

Michael Zavros is a leading Australian artist. His work has been exhibited in major museums and galleries throughout Australia, New Zealand, Asia and Europe. He graduated from Queensland College of Art, Griffith University with a Bachelor of Visual Arts in 1996.