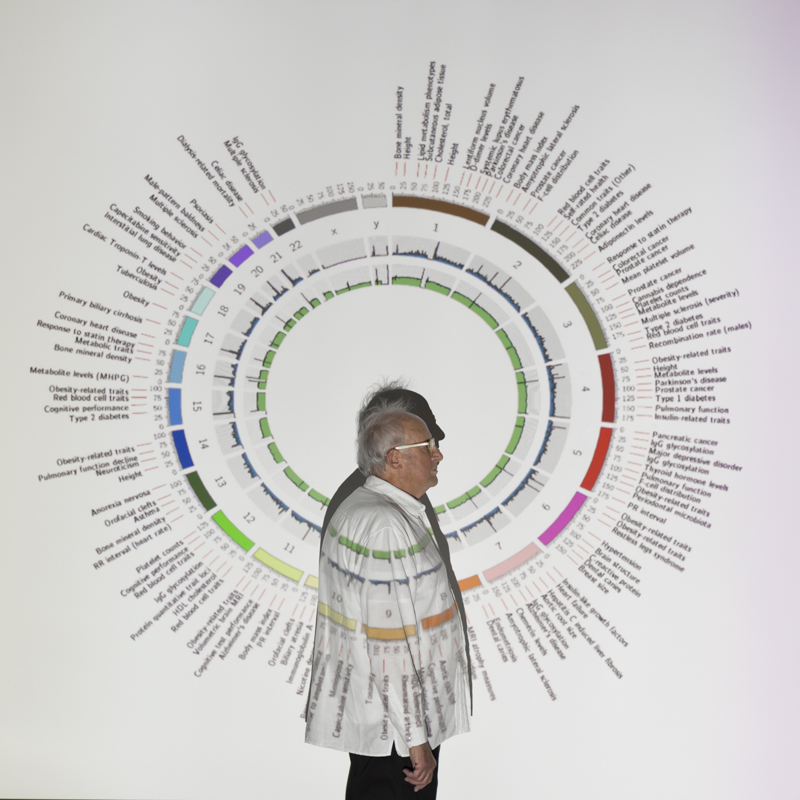 The Analysis of Billy Apple® stages the latest development in a ground breaking project that challenges our definitions of life and highlights cultural issues arising from the use and ownership of body tissue and genetic information.

It is a further development of The Immortalisation of Billy Apple®, a project by artist Billy Apple and scientist/artist Craig Hilton where art is in the service of science and science serves the artist to enhance and protect the artist’s brand by immortalising his biological tissue in perpetuity. The immortalisation transaction ensures that the brand (and the artist) can theoretically last forever unconstrained by death as his virally transformed cells can now grow indefinitely in cell culture medium.

In 2012 Apple’s cells were transferred as a living artwork to the American Type Culture Collection in Massachusetts (the world’s premier biological culture repository established to carry out research to improve the propagation, preservation, classification, and characterization of cultures and to develop new and enhanced culture products). At the ATCC Apple’s immortalised cell line is a resource available for both artists and scientists thereby creating further dialogue and interdisciplinary opportunities highlighting the ongoing nature of this project and immortality of these cells. As the cells usefulness increases, so does the significance and fame of the artist’s biological tissue as copies of the artwork and the genetic material are exponentially reproduced globally.

Using material from his cell line, the artist has recently been immortalized in a different manner – by sequencing his entire genome and digitalising the results. The mass of data generated by NZ Genomics Ltd (University of Auckland, Massey University and the University of Otago) and recorded as The Digitalisation of Billy Apple® can be stored on infinite machines and analysed in countless ways. Studies that help us understand this data will continue to be updated.

In The Analysis of Billy Apple®, we present data in Billy Apple’s genomic sequence that identifies among millions of genetic differences, those which correlate with known-published studies that associate these genetic differences with health predictions. These studies can be found in Whole Genome Association Studies databases. GWAS typically focus on associations between single-nucleotide polymorphisms (SNPs) and traits like major diseases.  We can follow Billy Apple®’s likelihood of certain physical (including health-related) traits on a curated resource of SNP-trait associations (NHGRI GWAS Catalog).  Some of these traits have been already realized. GWAS help us estimate Billy Apple’s risk of disease.

Here the artist confronts his own biology and possible future by seeing how he deviates genetically from known norms. This mirrors the situation that we all will face as individualized genomic data becomes cheaper and more accessible. The depth and complexity of it and almost daily discoveries means that there will be more and more known about our future health and ourselves, raising many ethical questions.

The Immortalisation project continues to explore important cultural implications regarding the use and ownership of body tissue, genetic information – issues that burden the development and use of biotechnology. In contrast to most donations, which are highly restricted, this tissue deliberately has no restrictions placed on its use.

I consent to the wide distribution of cell lines derived from my blood, including deposit with the American Type Culture Collection cell bank. I understand that this may enable unrestricted use of my cells in research outside my control, including the potential analysis of my DNA.
-Billy Apple 12/05/2009

This is a reconceptualisation of tissue acquisition as an artistic transaction. Here, the artist takes the plunge into an inevitable future making public his tissue and along with it, his genetic information. In The Immortalisation of Billy Apple®, the name Billy Apple® Cell Line (listed with the American Type Culture Collection and therefore available for all researchers of all kinds) clearly identifies the donor. The artist/donor (and brand) waives his rights to privacy in the name of art. And in The Analysis of Billy Apple® the artist’s genomic data is presented publicly in an exhibition at Starkwhite. This offers a stark contrast to the justifiable global anxiety surrounding the privacy of individual biological tissue, genetic and health information.

The influence of science and technology remains largely uncontested by culture. In the last thirty years, advances in molecular and cellular biology and the application of resulting technologies have vastly increased not just our understanding of the foundation and mechanisms of life, but also our ability to adjust life according to the whim and needs of this species.

In the wake of genomics, DNA synthesis, DNA editing, cloning technology, nano-medicine, tissue engineering, etc, it is anyone’s guess what will be possible for this species in the future. These emerging technologies already seriously challenge our definitions of life. So while the rest of us live with an uneasy mix of fear and hope, the artist embraces the biotechnology age and possibilities it offers in the future, including the potential to move from theoretical to actual immortalisation.

In London in 1962, I began an extended work, which was part of an effort to break down the separation between “art activity” and “life activity”. I decided to use my own identity as the vehicle with which to explore the concept of the artist as “art object”.

Billy Apple is an art brand created in 1962 when the artist changed his name in a self-branding exercise as a work shortly after graduating from London’s Royal College of Art. His six-decade art career began in London amidst the emergent Pop art scene then in 1964 he moved to New York where he exhibited in the Bianchini Gallery’s legendary American Supermarket alongside the likes of Jasper Johns, Roy Lichtenstein and Andy Warhol. Next he rapidly established himself as a key figure in the development of Conceptual art, exhibiting in New York’s museum, dealer gallery and alternative art scenes (including New Museum, Leo Castelli Gallery and Clocktower) and established APPLE (1969 -1973) one of the city’s seven original not-for-profit spaces. His subsequent text-based works from the 80s onwards drew attention to art system relations between artist, dealer, and collector. He became a registered trademark in 2007, formalizing his art-brand status, which he has continued to explore through transaction-based works.

The artist lives and works in Auckland, New Zealand where he is represented by Starkwhite. Apple was interviewed in the November/December 2012 issue of Frieze magazine: http://www.frieze.com/issue/article/brand-new/

CRAIG HILTON is a New Zealand scientist, artist and educator. After completion of a PhD in Biochemistry at the University of Otago, New Zealand, he took a position at Harvard Medical School and later at the University of Massachusetts as an oncologist and immunologist. He returned to New Zealand in 2003 and completed an MFA at the University of Auckland, Elam School of Fine Arts. He is interested in: the interaction of science and art, particularly art/science collaborations i.e. those with genuine art and science value/outputs; how art might be able to contribute to dialogue regarding science, molecular biology, biological discovery, biotechnology etc; and the cultural implications of these revolutionising technologies.