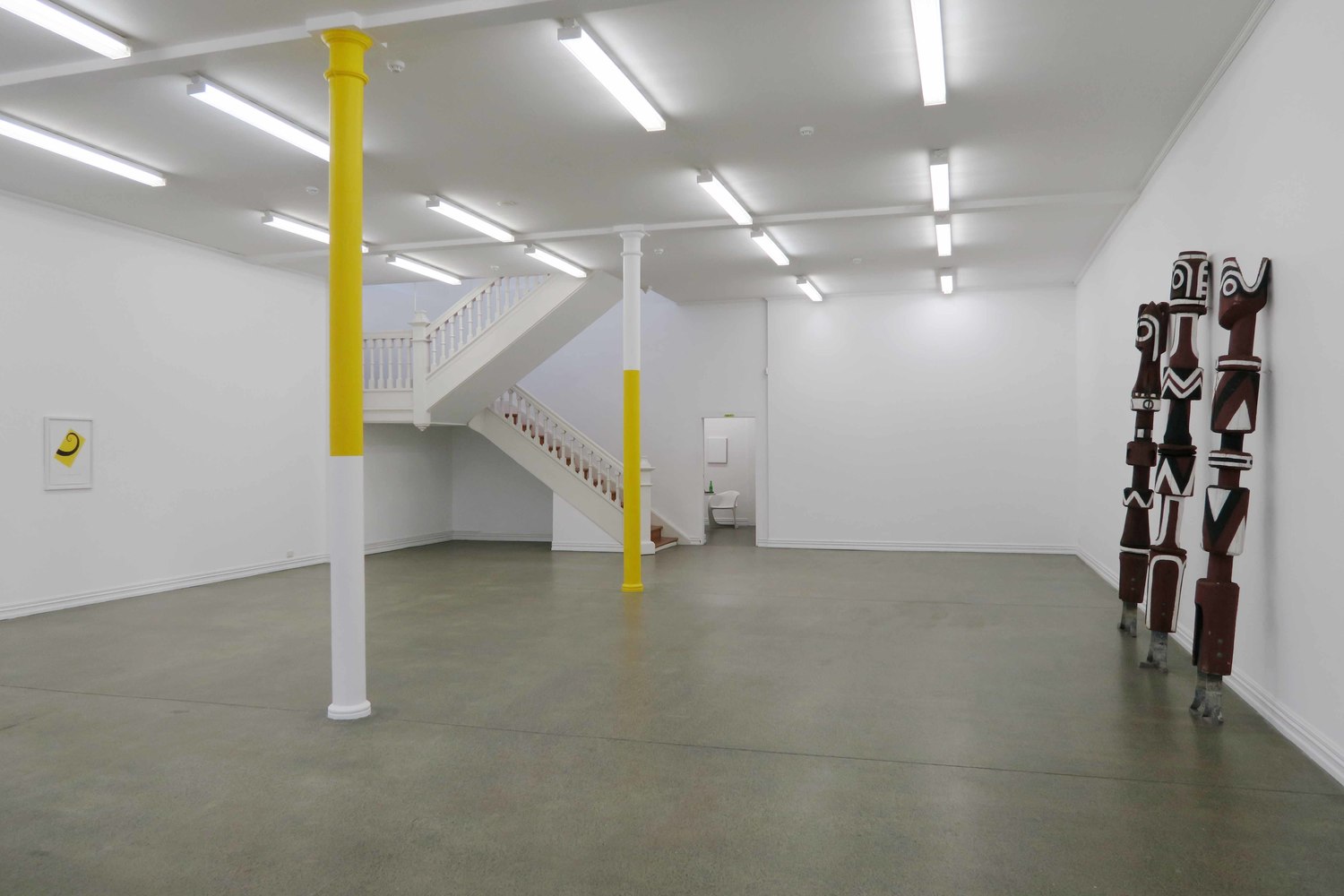 TOTEM presents works by two of our most influential artists: Arnold Manaaki Wilson whom Jonathon Mane-Wheoki referred to as the godfather of contemporary Māori art; and Billy Apple whose ground-breaking work can be seen currently in his retrospective Billy Apple®: The Artist Has to Live Like Everybody Else, curated by Christina Barton for the Auckland Art Gallery.

The Starkwhite exhibition pairs works which arise from two sculptural traditions—modernism where emphasis is placed on the autonomy of the art object, and conceptual art, which focuses on the idea as a dematerialized work-of-art. The form of both artists’ works is derived from trees—Wilson’s pou whenua function as posts or markers in the landscape and come from Tāne, the Māori god of the forest; and Apple utilizes the in-situ columns in Starkwhite’s main gallery, which are loosely descended from the Doric order of classical Greek architecture.

Wilson created a series of five works with pou whenua from 1980 to 1994. The first, exhibited here at Starkwhite, was a group of three which represent Māori ancestral figures. The tallest, Haumia, is god of wild, uncultivated, growing things and is associated with ferns. Haumia has two children, Rangitiina and Tiiniia and together, grouped as a family talking amongst themselves, they signify regeneration. They are carved using power tools and painted in the artist’s signature modernist Māori style, reminiscent also of early European ‘primitivism’. Red, black and white symbolise the female, male and spiritual energy harnessed and channeled, “unseen but felt” according to Wilson, from sky to ground in a cyclic model.

The modernist notion of autonomy is complicated by the pou whenua’s cultural role. Wilson intended for them to be installed outdoors to mark particular sites so they are able to operate spiritually and symbolically. It is his aim that through them we recognize that we must take care of the ecosystems which nature has devised to ensure earth’s vitality.

In a 2000 interview, the artist discussed Haumia, Rangitiina and Tiiniia, 1980 and their tour to Japan, Singapore and Australia, which he recalled was organised by the Ministry of Foreign Affairs. They were also exhibited in San Diego during the 1988 America’s Cup yacht race. Repainted in 1996 by Wilson, the pou whenua were purchased by the current owner from the first sculpture exhibition held at the Becroft garden, Auckland, raising funds for the North Shore Women’s Refuge. The group is now in transit after a 17 year sojourn amongst native plants in Wellington where they have developed a rugged environmental patina. Leaning temporarily against Starkwhite’s wall, they are ready to move to a new location.

While Arnold Wilson’s pou whenua focus on regeneration in nature, Billy Apple’s work, The Divine Proportion, represents the golden ratio as a logarithmic growth spiral, examples of which can be seen in nature in the geometric patterns of sunflower seeds and unfurling fern fronds.

Apple uses the golden ratio of 1: 618 as a readymade conceptual system in many facets of his life—for example as a compositional tool, a business plan as well as the proportions of ingredients in his Apple’s Blend coffee and Billy’s Tea. His first use of the ratio in a work was in 1986 when he represented it as percentages in AC/DC (Artist’s Cut / Dealer’s Cut), a small hand painted (by Apple) canvas divided into 61.8% and 38.2%, which was recently acquired by the Dunedin Public Art Gallery.

At Starkwhite, Apple divides the two columns up into the artist’s cut and dealer’s cut percentages. Starkwhite’s share is white and remains part of the gallery architecture, while Apple demonstrates his by painting it yellow, like a 3-D bar graph. This is a site-specific work. It is the idea that we are here to contemplate­—the instrinsic relationship between artist and dealer that is the conceptual support structure of any dealer art gallery.

By the late 1960s, Apple was producing site-specific installations. ‘Site-specific’ back then was a New York term which referred to idea-driven works that dealt with gallery architecture. Apple’s first use of columns was in his 1975 work Circular Subtraction at Martha Jackson West, New York. He removed a strip of paint from around the central column with a disc sander. His first painted pillar was a 1979 red ‘censure’—a critique of its intrusion into the exhibition space at the Bosshard Galleries in Dunedin.

But the actual precedent to Starkwhite’s work is Pie Charts and Bar Graphs at Mori Gallery, Sydney, where in 1997 he divided up the gallery’s two columns into the golden ratio. Apple had them painted in fluorescent red then placed gold acrylic pie charts (that defined the 61.8% and 38.2% of the area of the columns’ footprint) strategically on the wall. The whole installation could be read as a geometric representation of the golden rectangle.

In curating together the works by both artists’, we can appreciate their individual approaches to art as well as contemplate the depth and significance of their contributions to culture. The concept of totem symbolizes a clan’s guardian—the ancestral father. The dialectic between a clan and its totemic idea serves to protect, teach and successfully structure its social system. In Freudian terms, a totem is the psychological stand-in for the father. So if we consider that art is a tribe, then we can posit that both Arnold Manaaki Wilson, as an artist Kaumatua, and Billy Apple® are totemic figures within our milleu.

Arnold Manaaki Wilson in conversations with Mary Morrison, 1996 and 2000