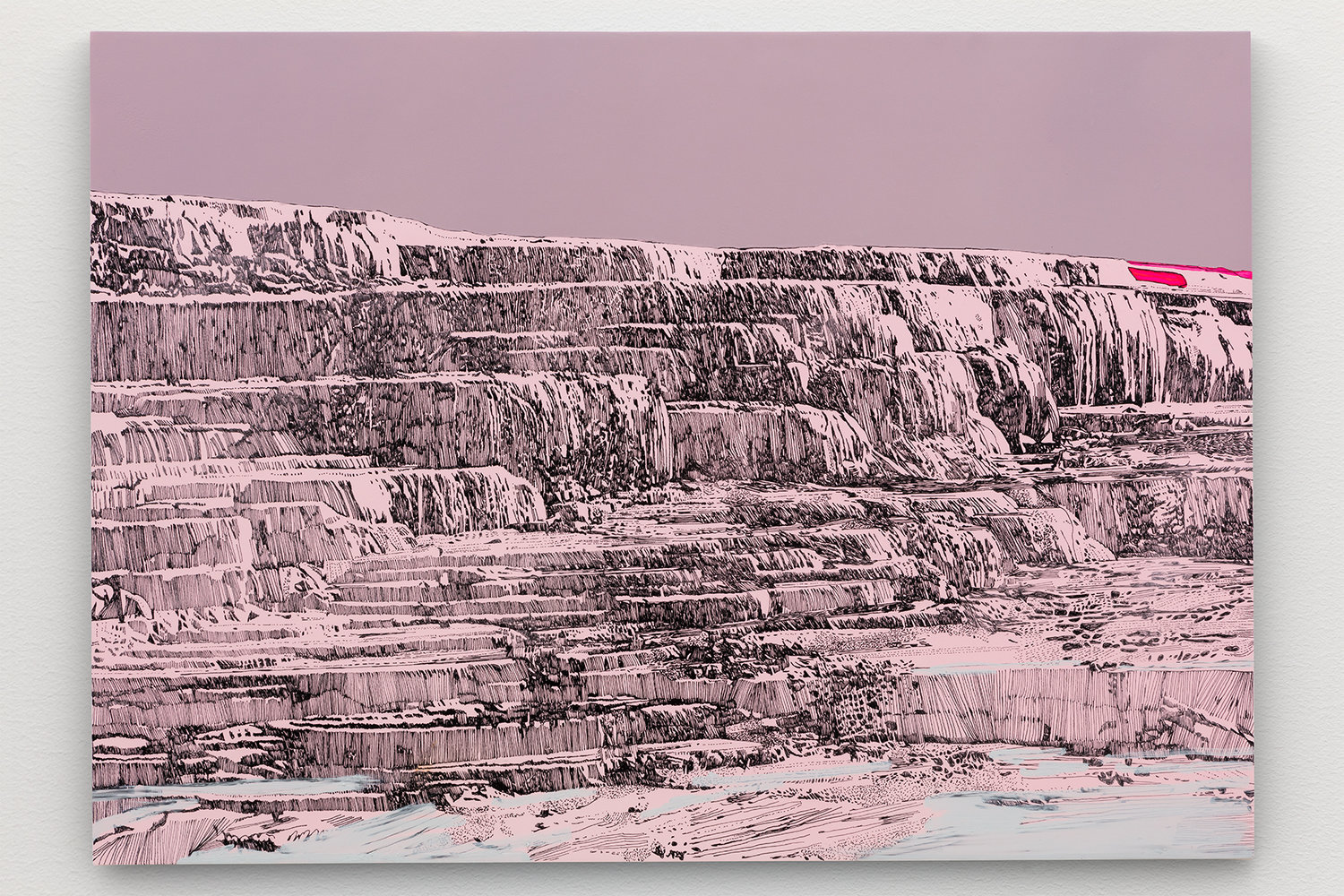 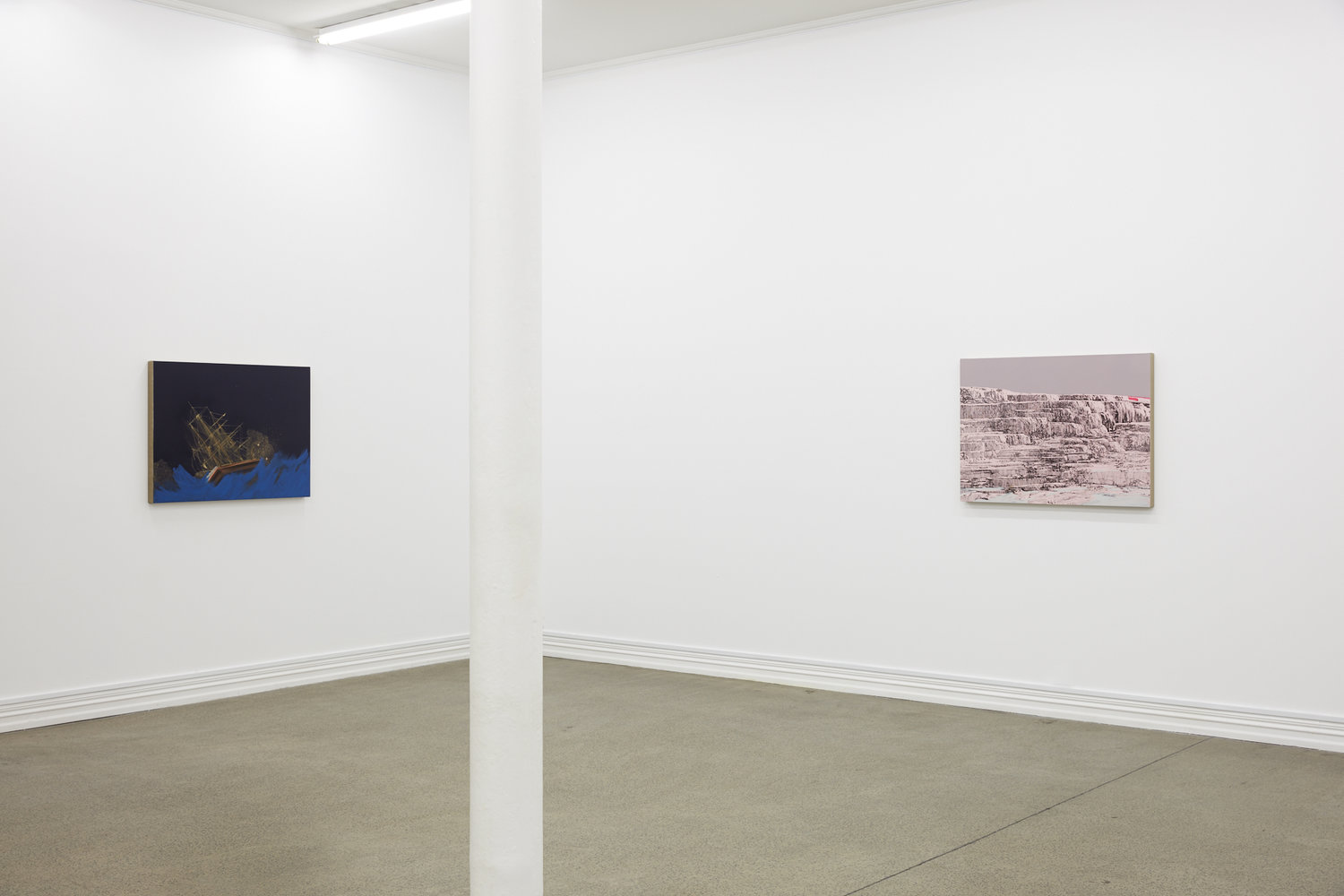 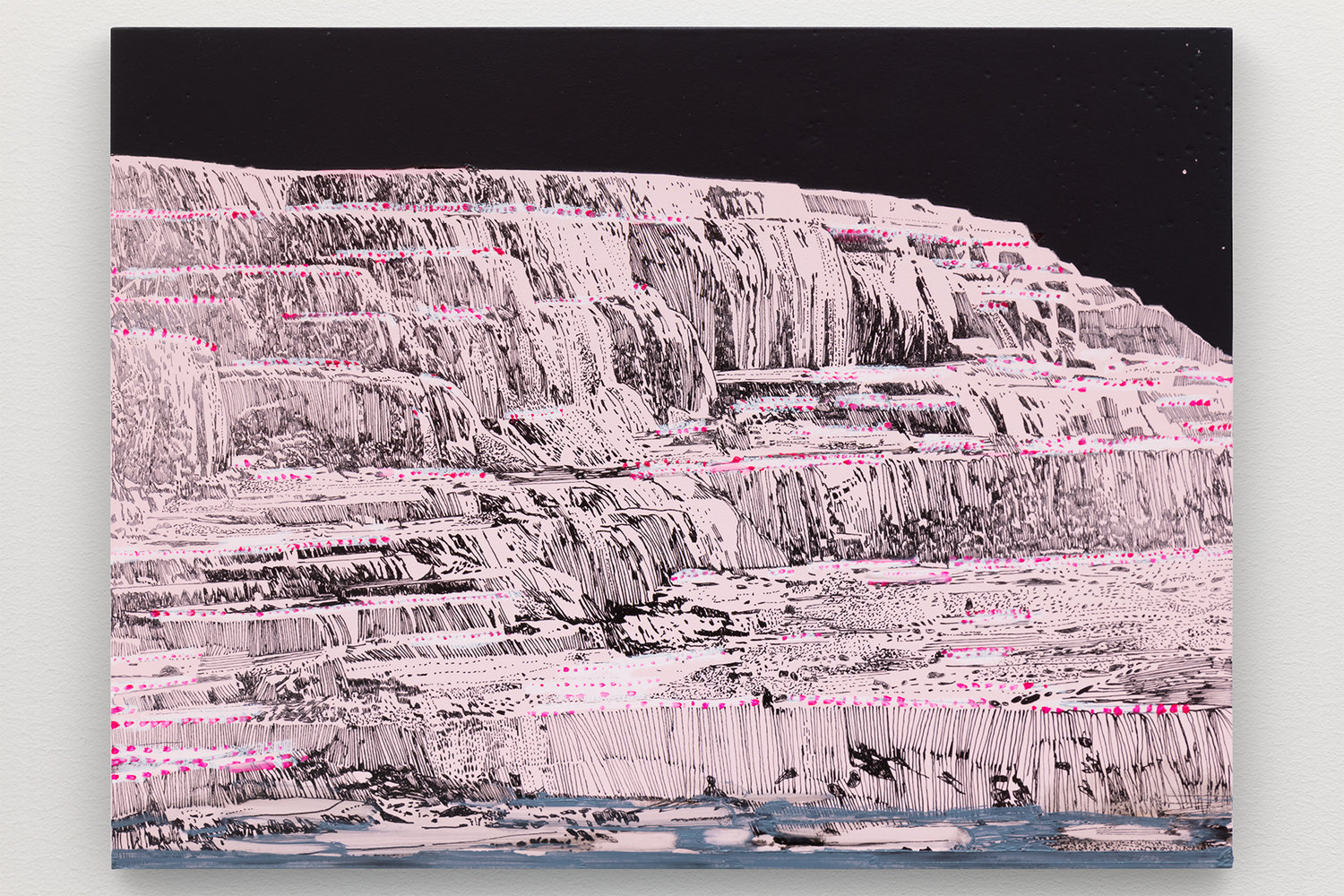 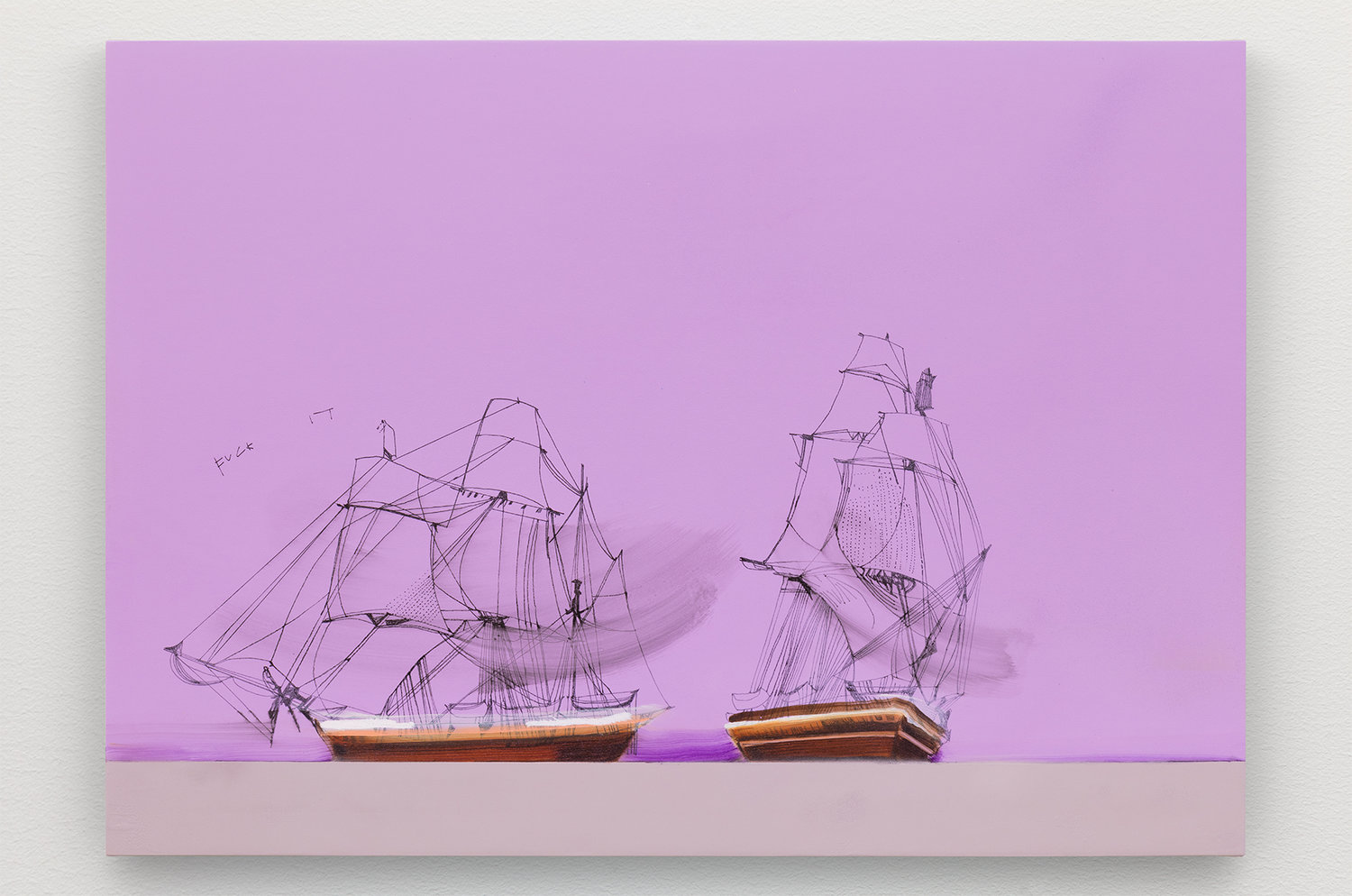 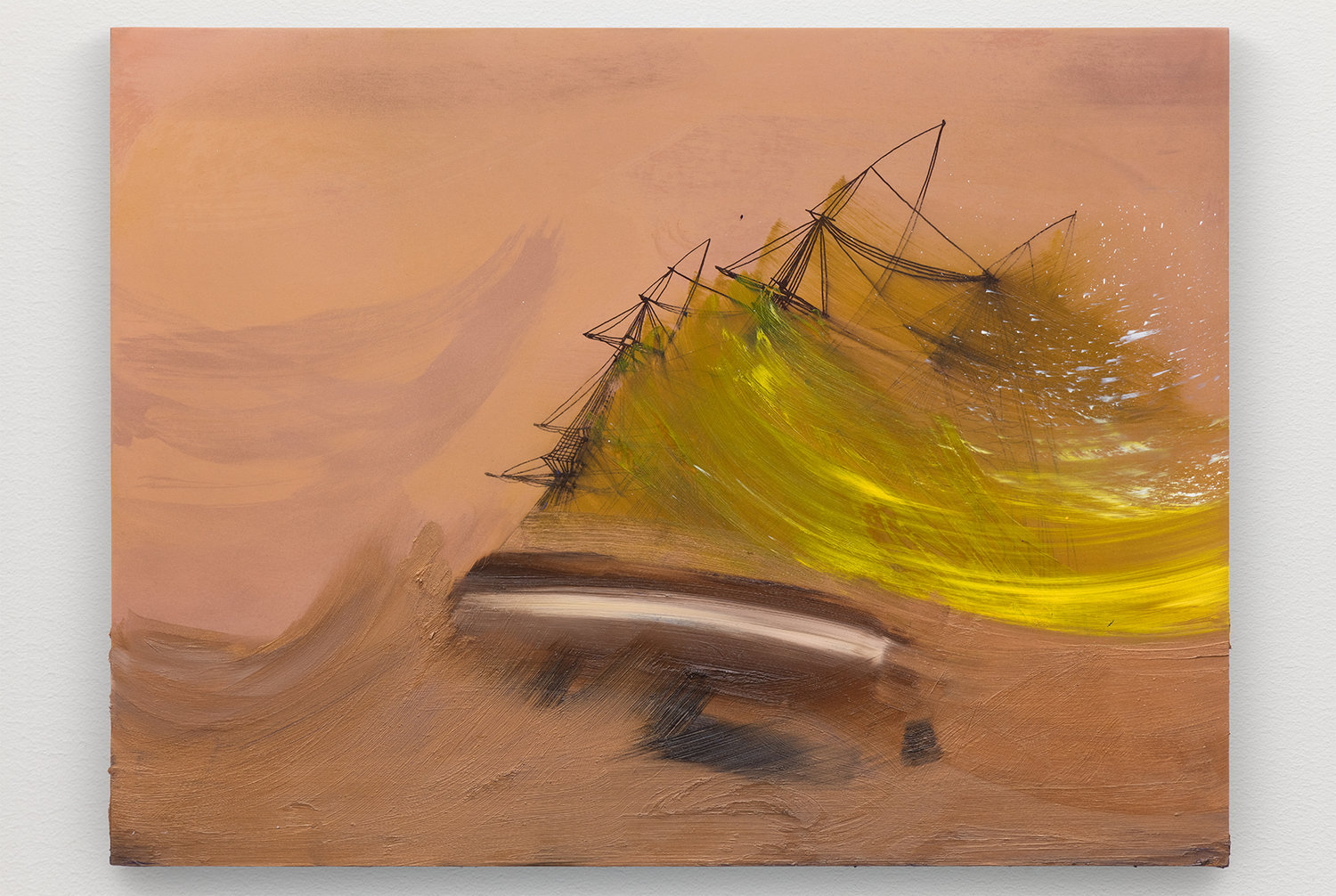 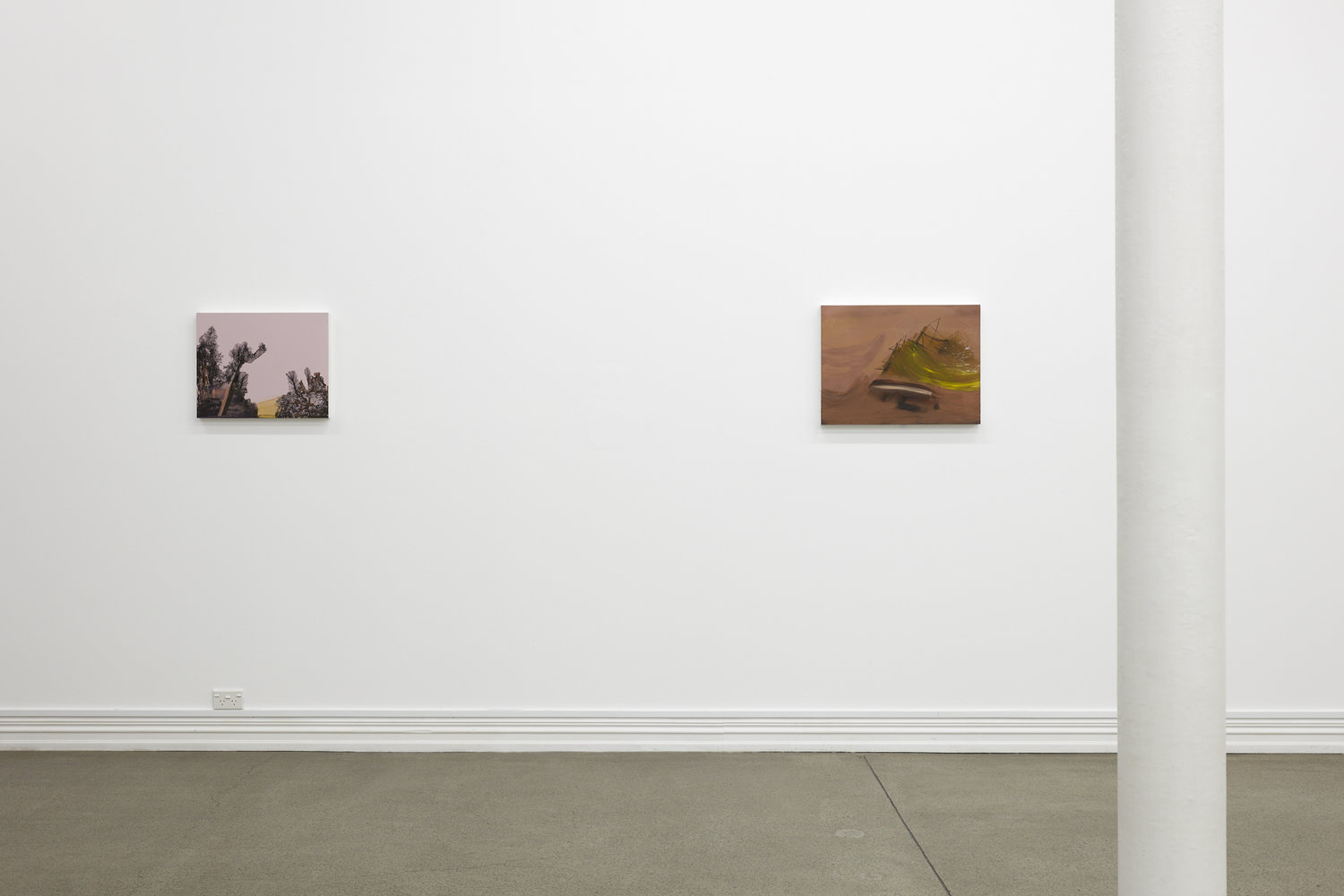 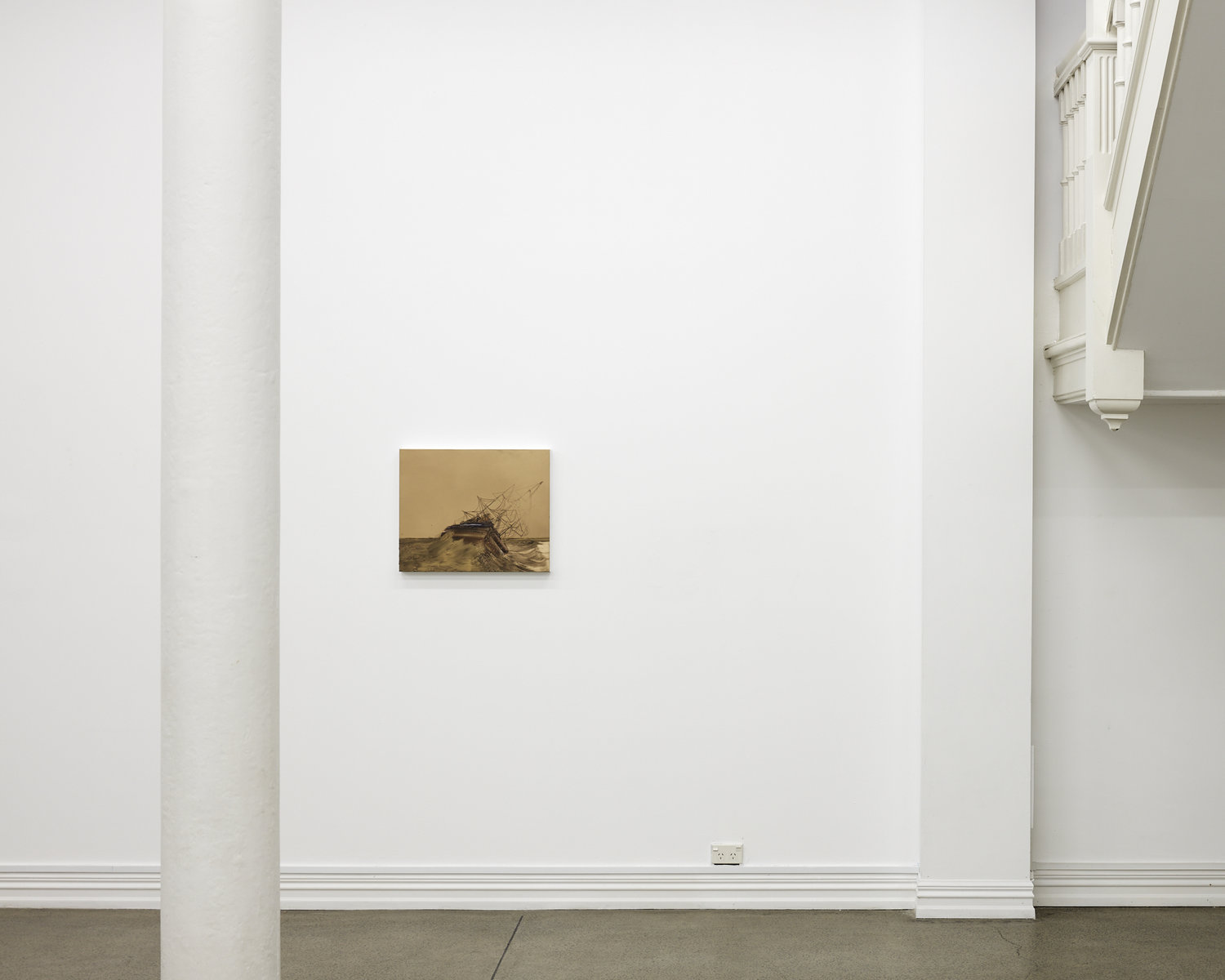 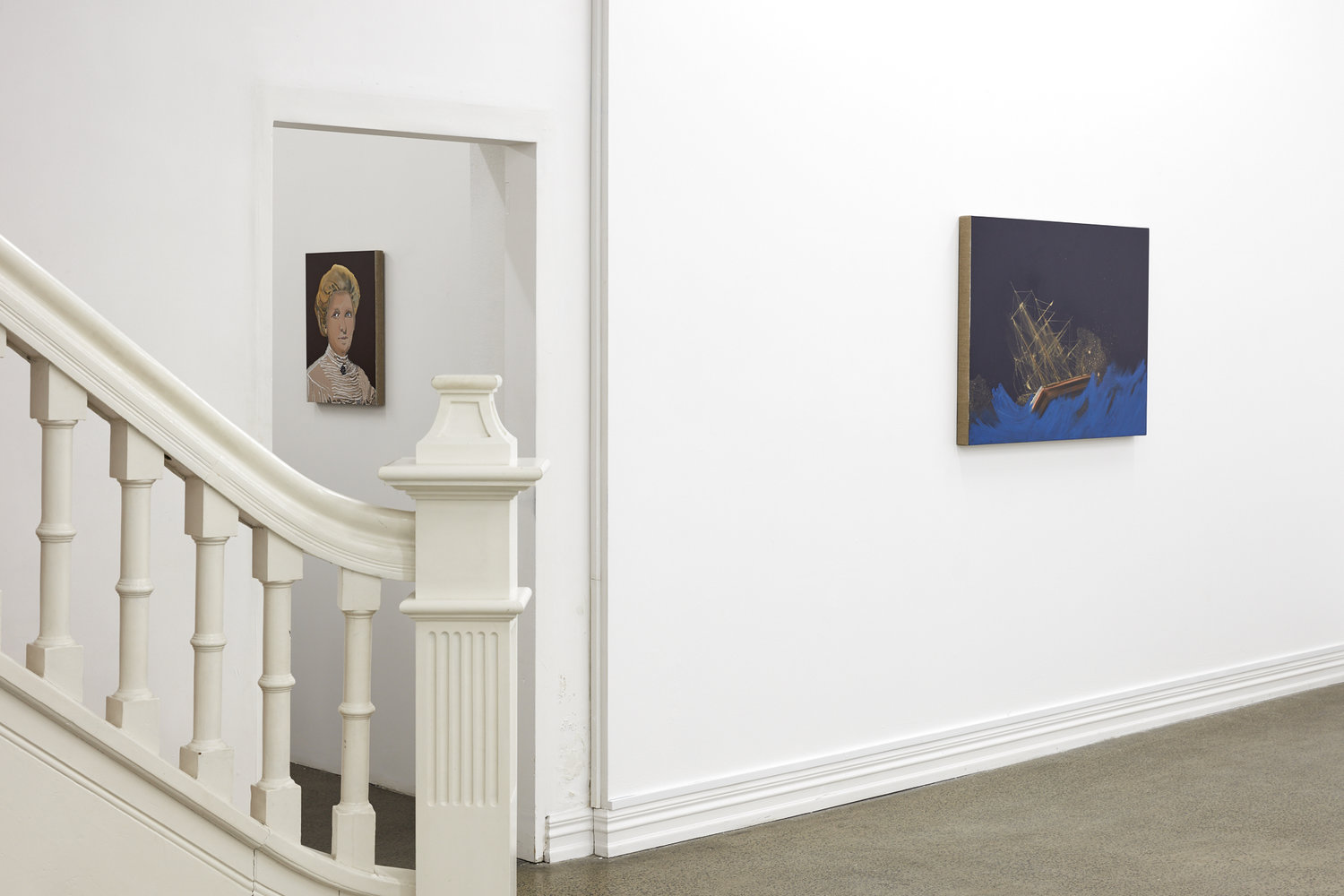 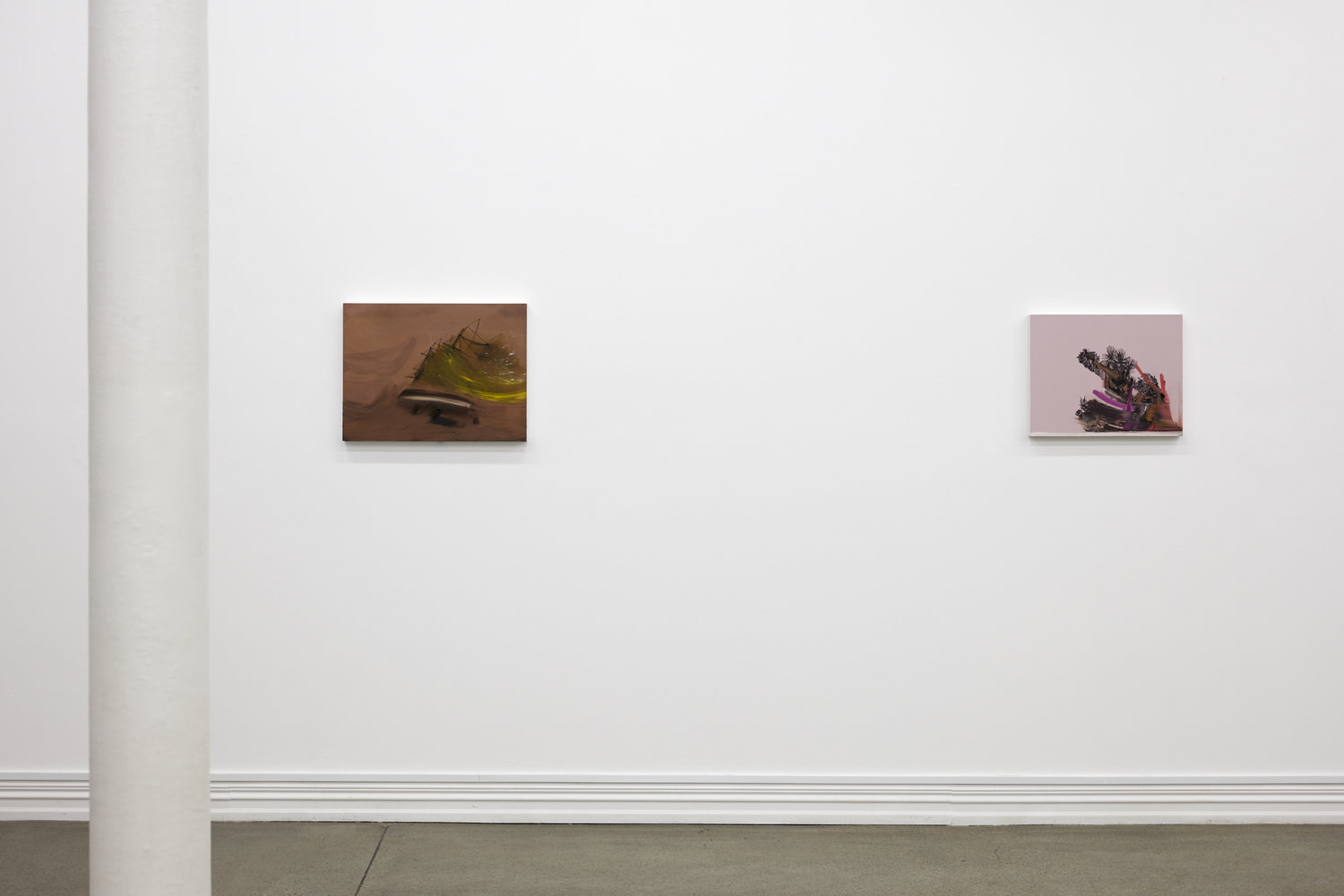 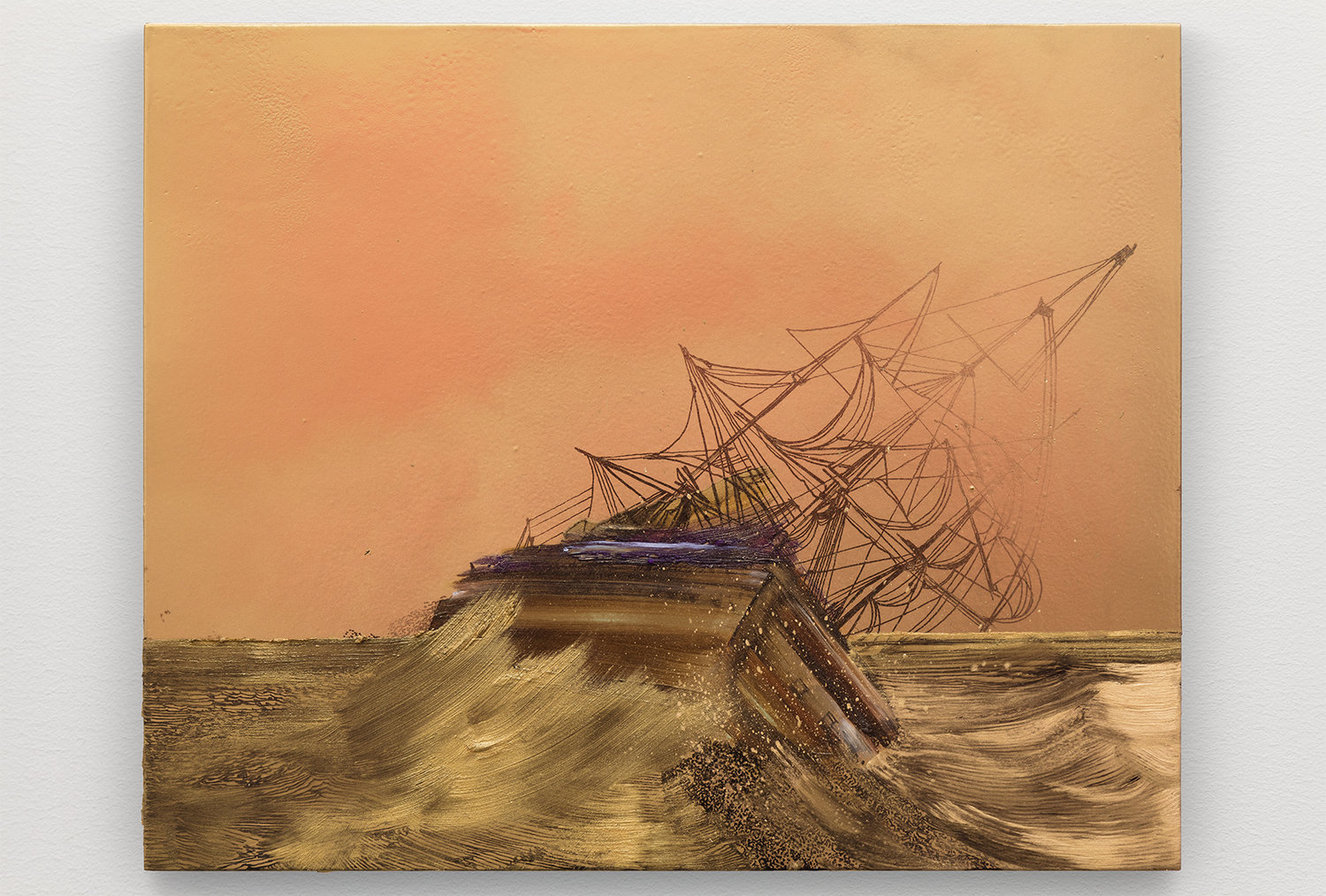 American painter Whitney Bedford creates portraits and landscapes with emotional charge as to embolden her archetypal subjects with memory and paint. Bedford uses iconic public figures and the popular mythology of recent academia to create a personal encyclopedia of references. The metaphors and visual symbols in her practice form a rich and potent landscape from which to map current history and contemporary romanticism.

Bedford’s paintings are created on wooden panel wrapped with linen. She starts with a very smooth surface, usually painted with a flash of flat but bright colour, then drafts and draws her subjects with ink. An artist who often draws from old etchings or stylised black and white photos, the drafting process is a nod to the original source material, and also to Bedford’s architectural training. Next Bedford applies oil paint to bring the painting to life, pushing and pulling the oil across the work’s surface. The paint overcomes the dialogue set up by the line work, and the work oscillates between a drawing escaping the paint and the paint freeing itself from the grid of line and form.

While the surfaces of Bedford’s work are characterised by line and colour and haunted with imagery that speaks of history or place, they are underpinned by strong conceptual currents. Bedford has titled her exhibition Bohemia, seeing the paintings as “a fantasy arcadia compared to our dark and conservative times.” There’s a sense of the mythical to these paintings, their strange beauty offering an idealised place or age, somewhere to escape and rediscover what’s essential. Against the onslaught of current politics and the inauthentic, kitsch, and trivial that dominate the media and contemporary life, Bohemia offers refuge.

Creating an escape from a materialistic and conservative world, Bohemia presents the past as a roadmap for the future. Characterised by both the romanticism of history and colouring reminiscent of acid house raves, Bedford’s practice pitches the past against the contemporary. Her ongoing shipwreck series draws on the history of naval painting but uses the natural stage of the sea as a metaphor for personal and political memory.  Drawing from academic paintings of battles fought at sea to document the political landscape, Bedford uses the same canon of imagery to mark current history. Posing readings as diverse as end of empire, or passage of human life, her shipwrecks represent thresholds – between despair and discovery, old and new ways of being.

Although it may not serve us, there’s a strong allure to the roller-coaster ride of terror and fascination that certain individuals or events in life evoke. Bedford’s feverish dream landscapes illustrate this duality. It is their beauty as much as their impending doom, that attractiveness in spite of fear, that draws us. With its hint of horror, they embody the classic notion of the sublime, but redefined for our contemporary time.

Bedford’s painting is an introspective pursuit. Like psychoanalysis, it presents the inner life as a force of nature, both menace and wonder. The mind, like the world it lives in, isn’t always pretty place, and this constant duality is played out in her practice. She gives us both still and violent, arid and water logged, hot and flat vs tumultuous expanses of ocean. What’s consistent is the raw source of untamable energy that emanates from each painting.

Bedford received her MFA at the University of California, Los Angeles in 2003. She was the winner of the 2001 UCLA Hammer Museum Drawing Biennale and received a Fulbright Graduate Fellowship from Hoschule der Kuenste, Berlin.

Bedford has been the recipient of many grants and awards, including a Pollock-Krasner Foundation grant in 2015.

Bedford currently lives and works in Los Angeles, CA, including teaching as a guest lecturer at the University of California and Chapman University, Orange, CA.