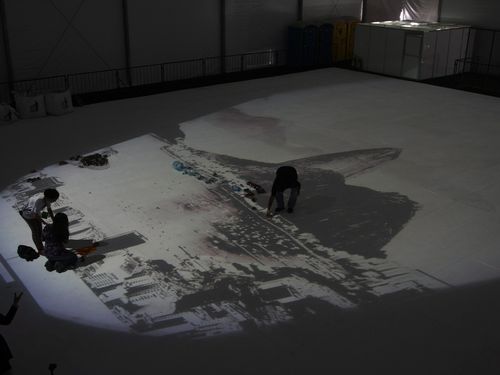 Brazilian-born, New York-based artist Vik Muniz is turning Rio's garbage into a portrait of his city in his New Landscape project, a meditation on the ever-quickening pace of consumer culture that he is creating on the margins of the United Nations Rio+20 conference on sustainable development.

His idea is to create a giant collage out of trash and then take an overhead photograph of it, creating a work so realistic it looks like a photograph of Rio's Guanabara Bay and its surrounds, not a photo of garbage. Visitors carrying trash place their contributions on a projected image of the Bay taken by Muniz and his assistants shift around their contributions and add other bits of trash according to his instructions.

Muniz has worked with trash before and is best known for his portraits of garbage pickers at a Rio de Janeiro landfill, a project that was chronicled in the 2010 documentary Wasteland.
Images: Muniz's projected image of Guanabara Bay (top) and people adding trash to his landscape (bottom)