Pussy Riot on the run 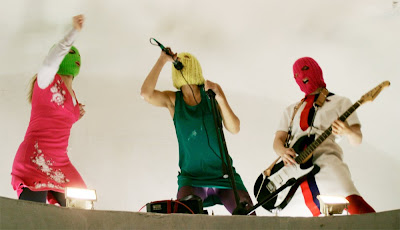 Two members of Pussy Riot have fled Russia to avoid prosecution for the protest against Vladimir Putin that sent three of their members to prison.

Five of the feminist group took part in the provocative performance inside Moscow's main cathedral to protest the Russian leader's rule and relationship with the Orthodox Church. The women wore their trademark coloured balaclavas, which made it difficult for the police to identify them and only three were arrested. Moscow police say they are searching for the other band members, an apparent warning to the group to stop its anti-Putin protests.

Pussy Riot tweeted that two activists had fled Russia and are “recruiting foreign feminists to prepare new protest actions.” Another message said at least 12 other members of the group remain at large in Russia.
Image: Pussy Riot performing in Moscow