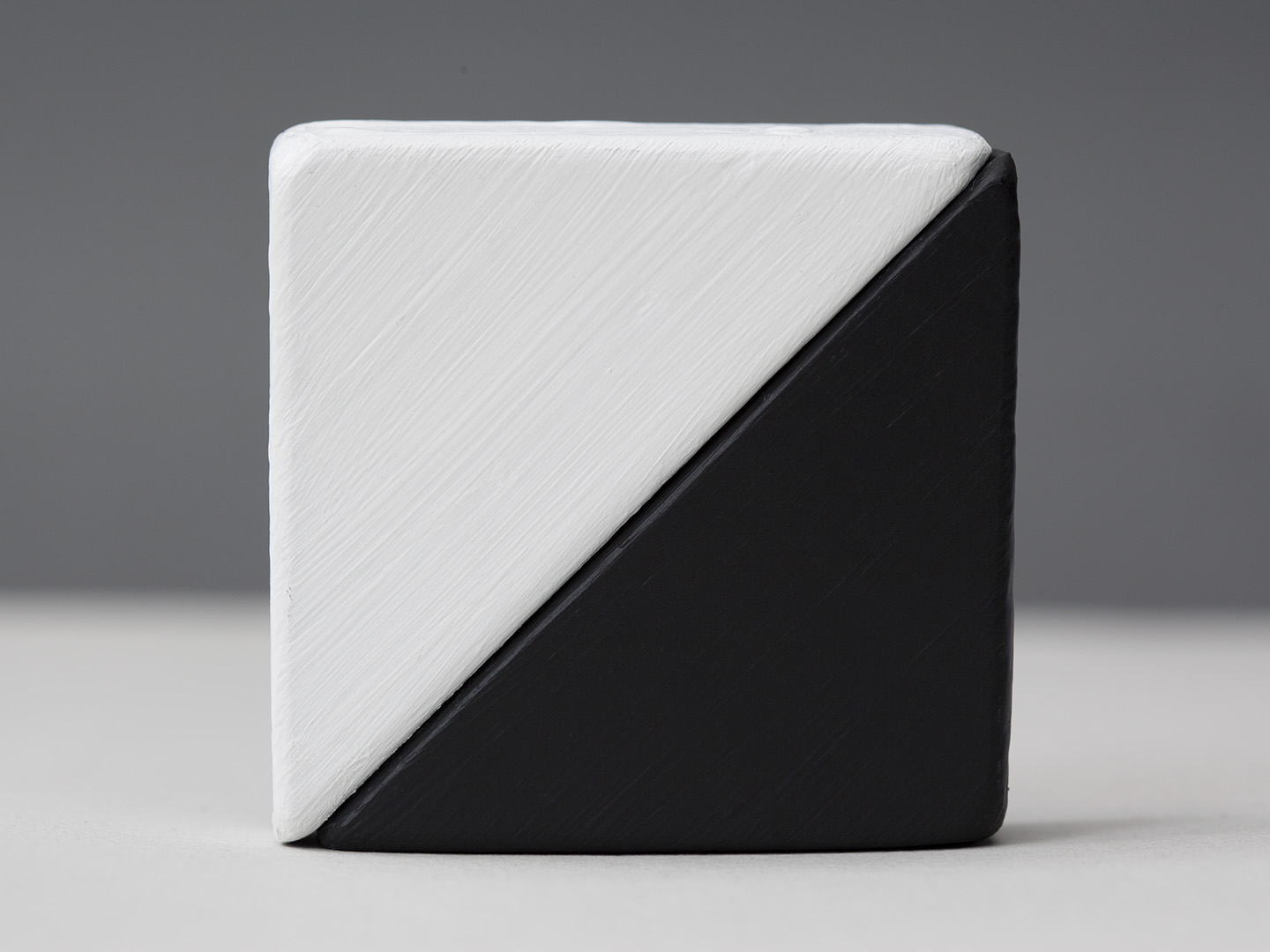 Gavin Hipkins’ new series documents readymade children’s wooden play blocks that he has hand painted, and assembled on the studio table for photographing in close-up. The series explores a psychology where the artist turns child at play in the studio — embellishing toyshop play blocks in different colours than their generic stock hues, then treating the blocks as still life material.

Photographed with a macro lens and greatly enlarged, the photos resemble abstract paintings, and echo the minimal designs of New Zealand’s grandfather of geometric abstraction, Gordon Walters. Except where Walter’s works were clean and sharp, in Block Paintings brush strokes, paint drips, and imperfections on the painted surfaces are revealed through the verisimilitude of a photographic surface. The narrow depth of field builds a tension between an ultra precise surface detail on the blocks, with a blurring of surrounding focal planes.

“Sitting between sculpture, painting, and photography, I like to think of these new works as representations of ‘kinder monuments’ — a reference to their ambiguous scale, and the occupation of the field plane by massively enlarged brutalist wooden blocks,” says Hipkins. “The toy blocks are photographed on my studio table under natural lighting conditions. This treatment of isolated objects recalls tabletop still life traditions, as well as product photography used for advertising commodities. Yet by photographing the arrangements under natural light conditions, rather than the clinical lighting of the photographic studio, there is a clear painterly treatment.”

True to the status of paintings and handcrafted conventions, the new works ignore the very reproducibility of a photographic ontology, instead, these works are presented as unique photographic prints. Hipkins’ return to the still-life genre and a strategy of photographing humble painted objects in the studio, builds on important works including his multipart photo-installations The Colony (2002) and The Pavilion (2011). He positions the Block Painting series as extending his navigation of modernity and photography via referencing eclectic pictorial strategies, and revisiting an avant-garde utopianism. The later exploration has included repeated photographic series of late modern and Brutalist architecture in series such as the multi-panel documentation of Le Corbusier’s Chandigarh in Leisure Valley (2014), and his earlier photo-frieze of New Zealand tertiary institutions in The Habitat (2000).

Gavin Hipkins is an Auckland-based artist who works with photography and moving image. He has been described as a ‘tourist of photography’ reflecting a strategic treatment of eclectic styles and diverse photographic techniques. Over the last two decades his practice has engaged landscape and commodity discourses via a range of analogue and digital technologies, photo-installations, and artist videos. In 2014, Hipkins’ first feature film Erewhon — an essay adaptation of Samuel Butler’s 1872 novel Erewhon, Or Over the Range — premiered at the New Zealand International Film Festival and Edinburgh Art Festival.

He represented New Zealand at the 1998 Sydney Biennale, and the 2002 Sao Paulo Biennale. His work is included in major public and private collections including the Queensland Art Gallery, the Auckland Art Gallery, Museum of New Zealand Te Papa Tongarewa, San Diego Museum of Photographic Arts, and George Eastman Museum of Photography and Film, Rochester, New York. He is an Associate Professor at Elam School of Fine Arts, The University of Auckland.