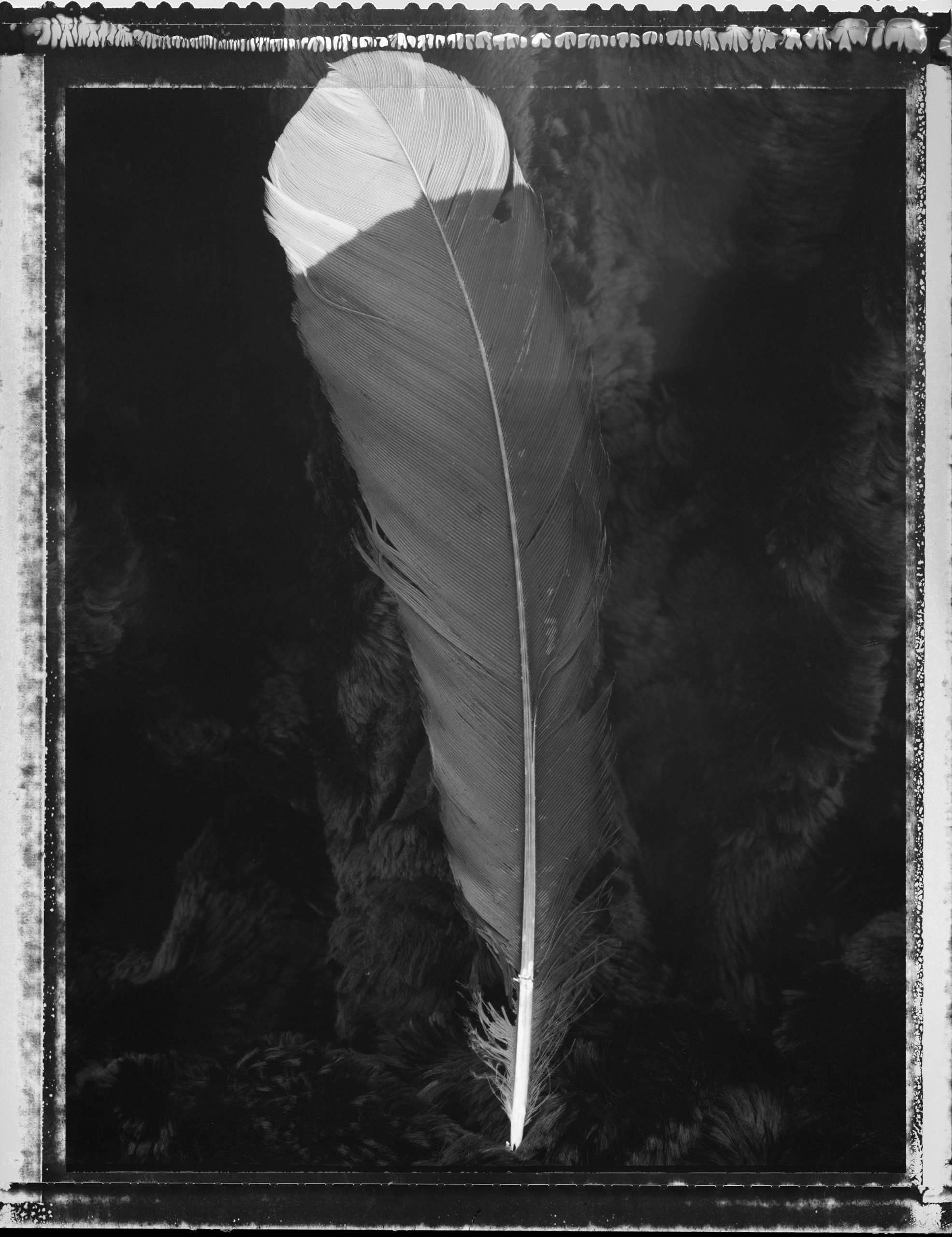 Starkwhite presents a group exhibition (upstairs and downstairs) titled Sampler 2019, from 23 July – 15 August 2019. The exhibition includes artworks by represented artists and features works made for this exhibition along with others dating back to the 40s and 60s.

Two new works by Fiona Pardington and John Reynolds are the centerpieces of the exhibition.

Fiona Pardington is celebrated for her formal photographic still lifes, particularly those of ‘taonga’, or cultural treasures. Of all Tane’s children the Huia was the most sacred to Māori and the bird was considered tapu, a revered treasure. In pre-European times, only those of the highest rank wore the Huia’s tail feathers in their hair, but the bird was hunted to extinction in the early 1900s when the distinctive plume became fashionable in Europe. Koru Huia presents a single feather, resurrected and recreated by Pardington as a rich and lustrous portrait. Joined by a photograph from her recent Tiki: Orphans of Māoriland series, one lost taonga meets another. This unusual item was discovered by Pardington in London’s Wellcome Collection alive and kicking but lost to history and the mercantile inclinations of the 19th century. This striking but curious object is a faux hei-tiki, probably created for the Pākehā or international market – what art historian Roger Blackley calls the ‘curio economy’ – that flourished from 1880-1910.

For those who know John Reynolds’ ongoing Missing Hours series based on McCahon’s 1984 disappearance, View from a Cliff offers a hint of the recurring signs and symbols that have characterised this body of work. But now what were identifiably road maps have progressed into fully abstracted and angular mark making. The routes no longer connect or lead anywhere, the disorientation and uncertainty complete. Joining the familiar angularity is something quite new, a large organic shape. Across the left of the work a sumptuous flower-like form bursts forth, both beautiful and explosive. Referencing McCahon’s painting Mondrian’s Chrysanthemum of 1908, the form recalls the artist’s reflection on his work that ‘it is perhaps a chrysanthemum, perhaps a sunset, quite possibly a bomb dropped on Muriwai.’ Accompanied by the small block painting I Want You to Panic, the 7 metre long work anchors one wall of the gallery, a large-scale painting to ‘walk by’ in the McCahon tradition, and in which to lose yourself in Reynolds’.

Paratene Matchitt’s modernism is inflected with his Māori heritage. Known for bold geometric forms styled after the abstraction and minimalism of European artists, which delivered Māori content, he is also famous for his steadfast refusal to conform to the strictures of tradition and his ambition to create a new art (informed by modernism) capable of conveying his artistic and cultural vision. Matchitt draws on indigenous motifs and renders them sharp, highly stylised and graphically dynamic in a characteristic black, white, and red palette.

Seung Yul Oh’s sculpture explores scale, space, cultures, and time. He works across a broad range of materials and aesthetics, often using humour and playfulness in his sculptural forms to connect contemporary art and whimsey. Historically, enlarging an object or figure is typically used to express heroism or cement the monumental, but here Oh delivers three round and appealingly cute penguins, skewering the intersection between size and significance. What are we to make of Woomool? Are we to read it as an oversized and adorable cartoon animal, or see the enlarging to sci-fi proportions as something menacing? The work is light enough to entertain but also complex enough to suggest a sombre underside. Oh’s shift in scale prompts a re-thinking of otherwise familiar images and objects and calls into question the role of the viewer.

Ani O’Neill draws on the traditionally feminine making techniques handed down by her Cook Island grandmother and the mamas of her extended community. Cottage Industry is an ongoing series made from crocheted acrylic wool over steel rings. Like many ideas and objects introduced to Pacific societies, O’Neill’s practice adapts and reconfigures form and substance. Anchored within a practice that explores urban Pasifika culture and nags the art-craft divide through a range of sculptural forms, her witty and provocative practice addresses gender, identity, colonialism and tourism’s commodification of Pacific culture.

Works in the exhibition by The Estate of L. Budd and the collective known as et al. are willfully enigmatic, offering a gritty aesthetic and intriguing content. Abstract references to politics, academia, philosophy, and those contributing to the et al. umbrella collective populate the work. This shifting group of artistic entities is famous for offering no easy rewards, staging works with plenty of intrigue that resists a comprehensive understanding or polished ‘take’.

Billy Apple is represented by two works from his 1965 solo exhibition Neon Rainbow at the Bianchini gallery, New York. Executed in neon, translucent acrylic and serigraphs, the rainbows were exhibited in a windowless space and lit by the light was from the neons. In Sampler 2019 however a small acrylic sculpture and serigraph are exhibited in a more conventional gallery setting where the sculpture is activated by fluorescent and natural light.

In 1946 Gordon Walters visited Māori rock art sites in Canterbury with the artist Theo Schoon. Largely unknown to Pākehā, these early indigenous paintings and designs were to be a powerful influence on the development of Walters’ aesthetic. With its sharply drawn black figure and ochre background, Walters 1948 Untitled synthesises international modernism with the Māori art forms he was to endlessly explore throughout his practice. Anticipating the better-known koru works, the minimal form and limited colour palette edge edges towards the geometry and symmetry Walters played to its ultra-modernist extreme.

New Zealand born artist Len Lye (1901-1980) is recognised internationally for his pursuit of the “art of movement”, notably with film where he pioneered direct filmmaking (films made without a camera) by scratching or painting directly onto celluloid film and his kinetic sculptures. Sampler 2019 includes Roundhead (1961), one of the artist’s most delicate kinetic sculptures comprising four concentric circles that spin in space, with a sparse ambient sound track.