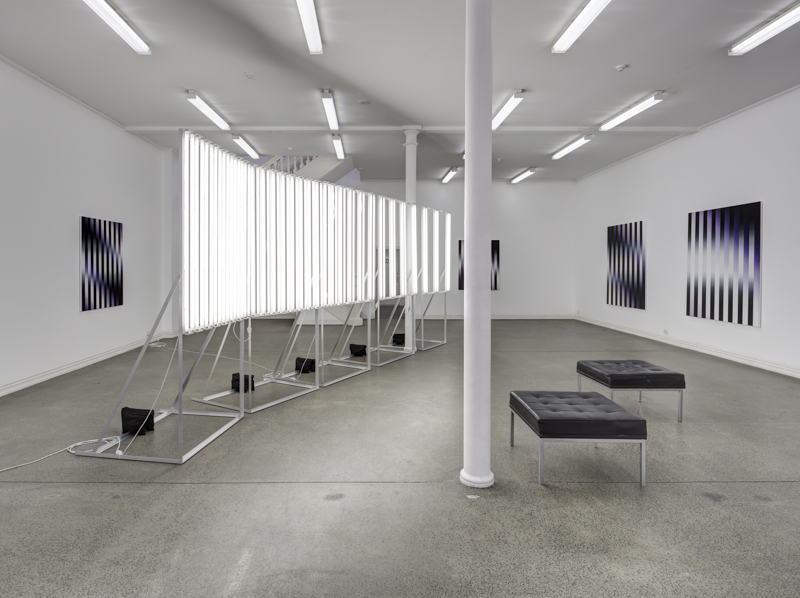 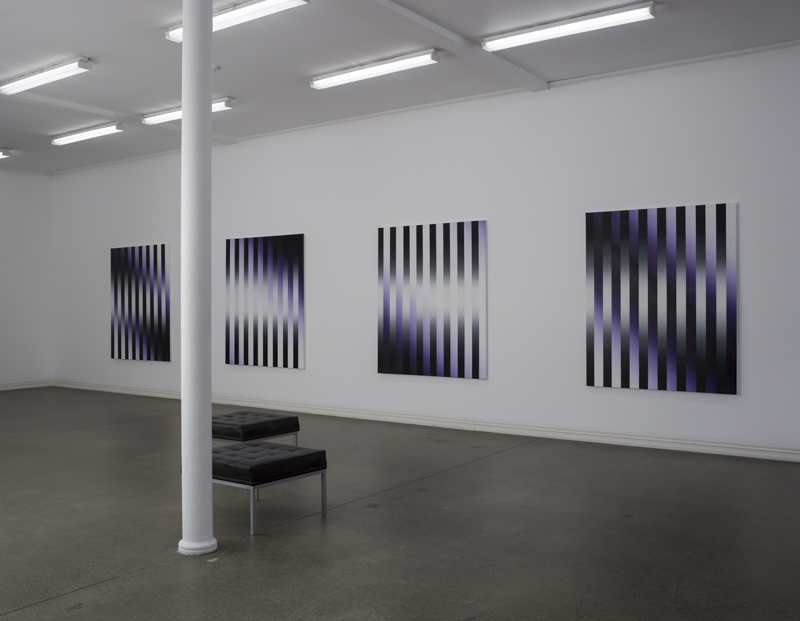 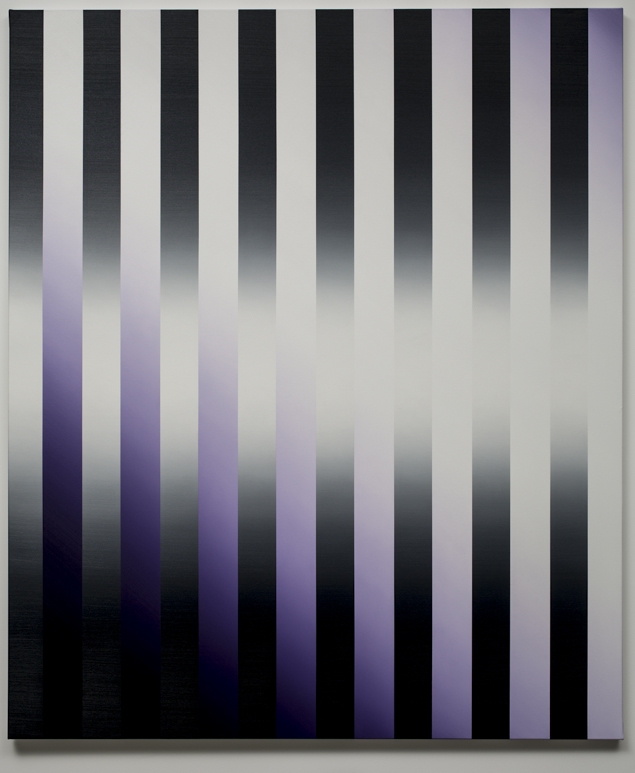 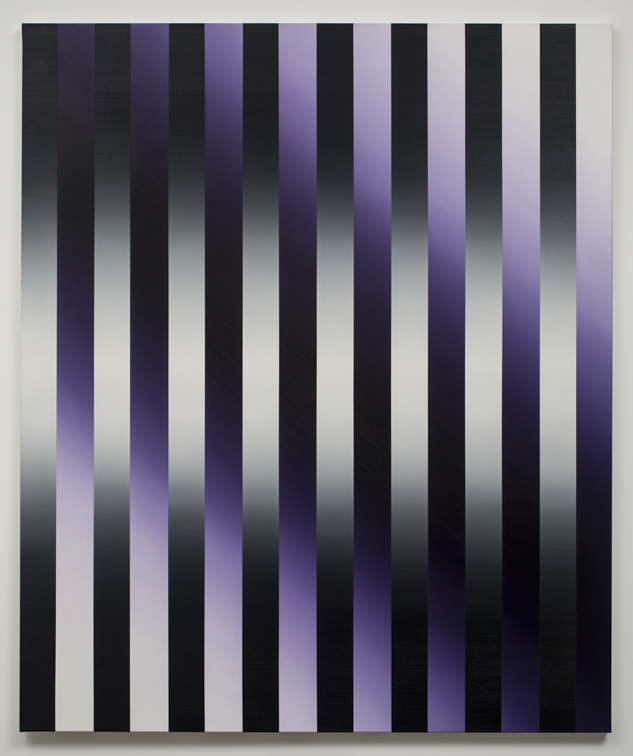 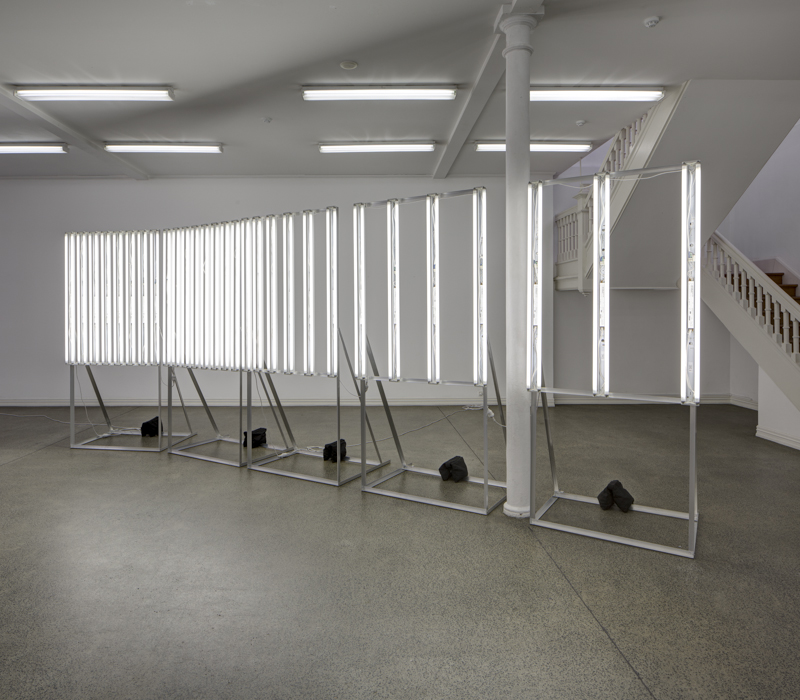 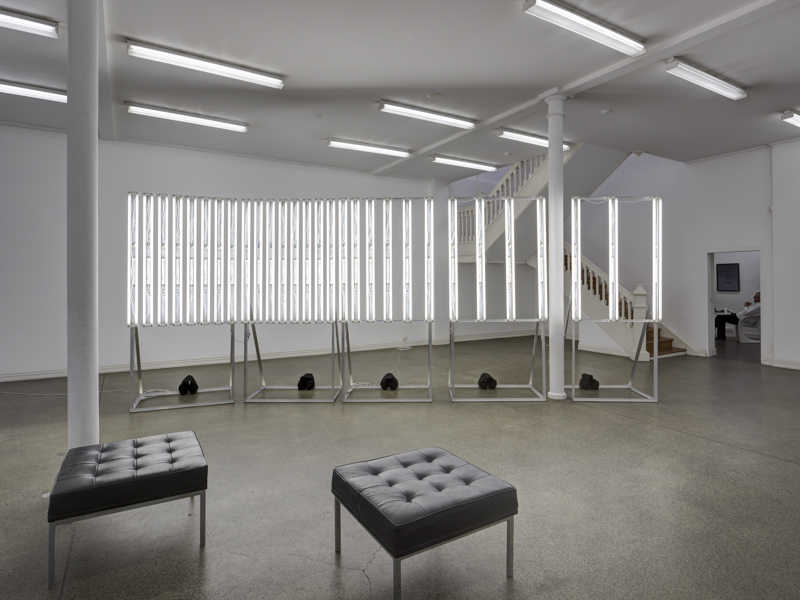 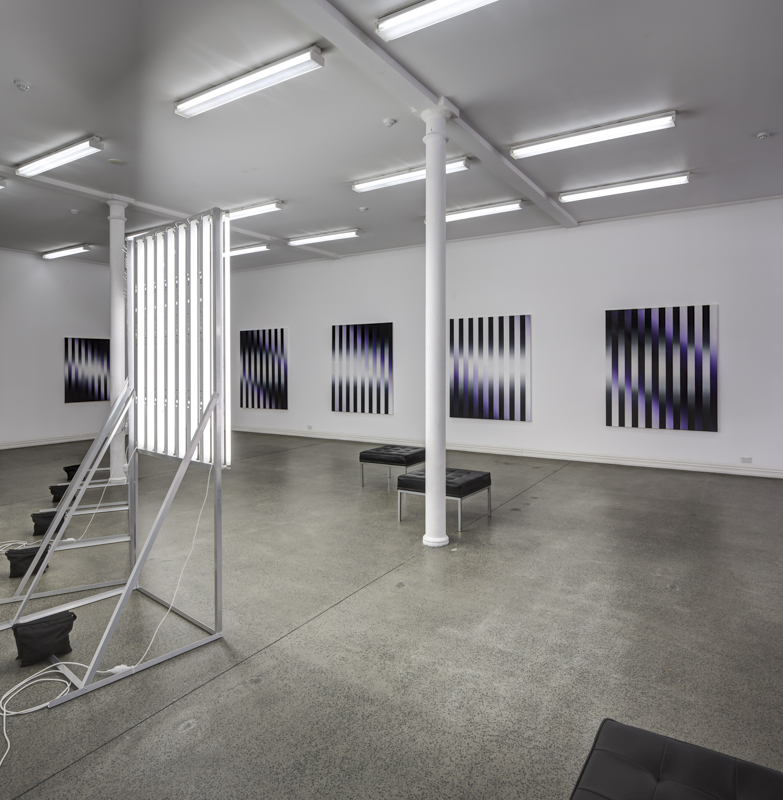 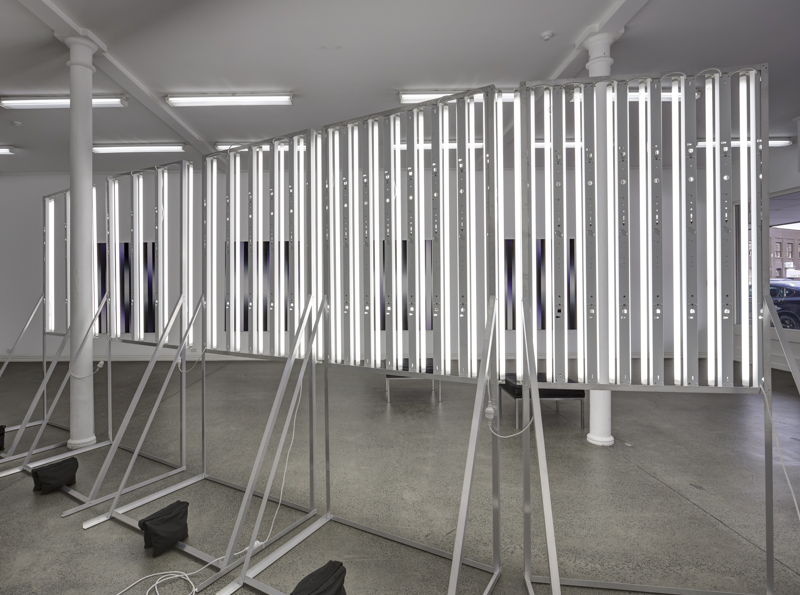 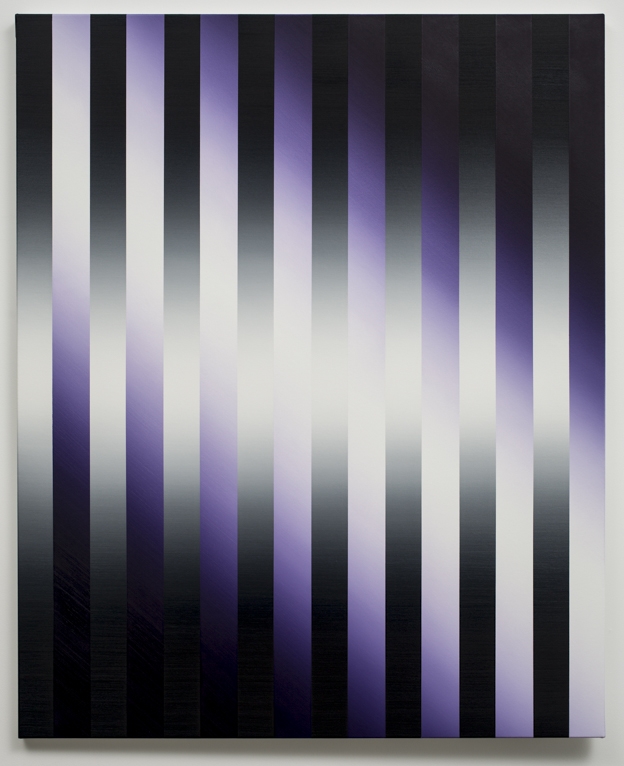 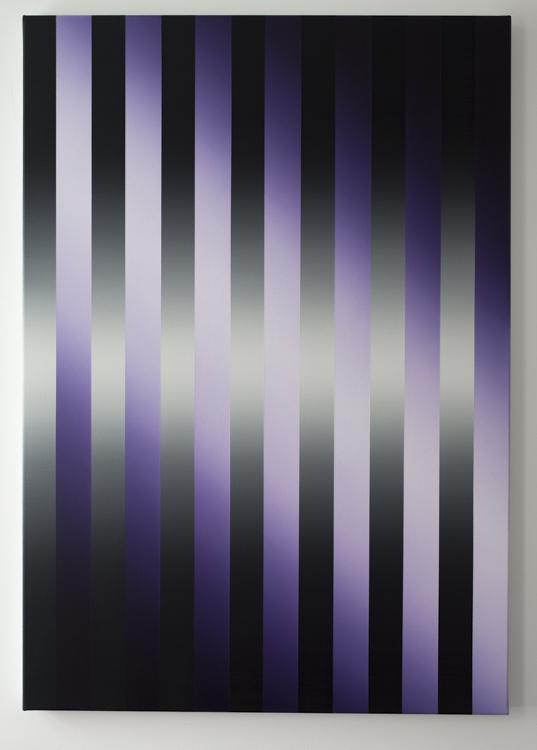 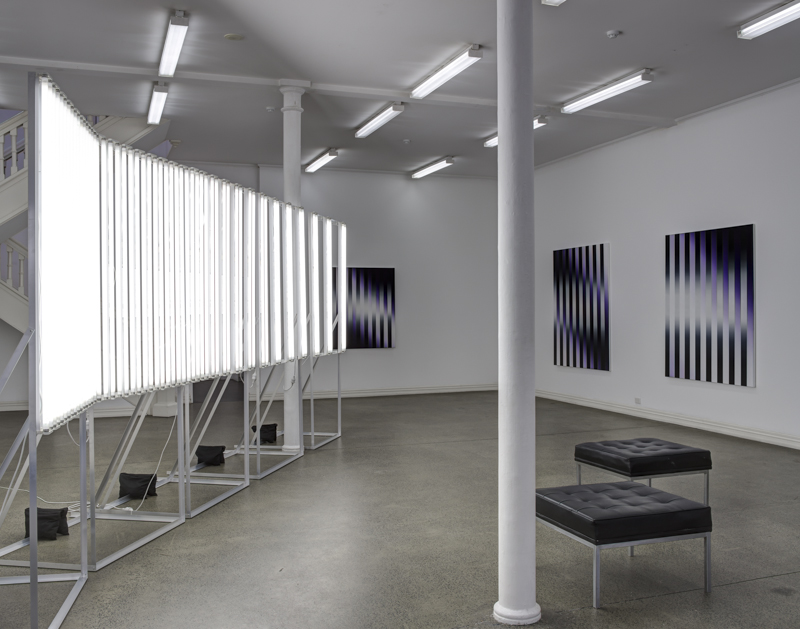 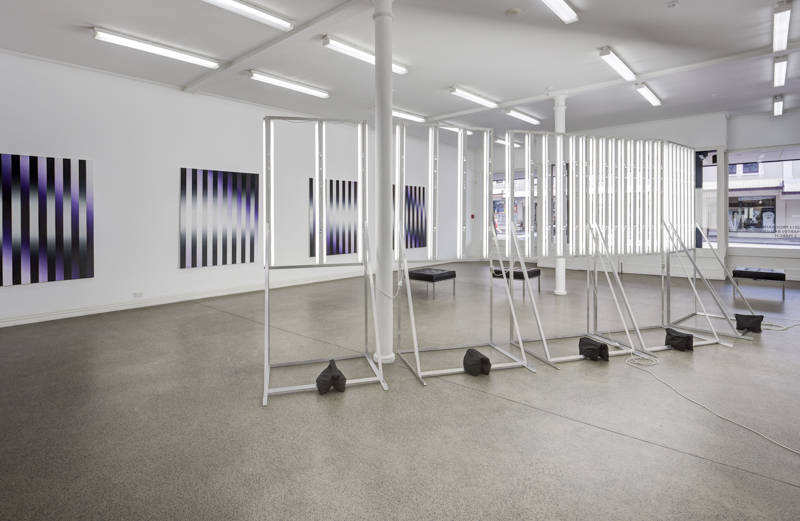 Starkwhite is pleased to launch its 2013 programme with a solo exhibition by Martin Basher, which runs from 5 February to 2 March.

In this exhibition, Basher continues his longstanding investigation into the ways which representations of the utopic and the sublime function in contemporary consumer society. Focusing on the use of imagery in commercial display, Basher’s work explores the power of the image to evoke desire, seduce a viewer, and to stimulate ‘consumer’ response.

Basher uses a diverse range of source material including sunset beach-posters, exercise equipment, cut glass and crystal, liquor, vitamins and lottery tickets. In this exhibition, Basher draws on the color and form of these sources, approaching them from a primarily abstract standpoint.

Integral to the show are a new series of vivid, hard-edged abstract paintings in purple, black and white. The color of these works derives from the highly photoshopped saccharine beach imagery commonly used to sell romantic package holidays, alcoholic spirits and the like, while the work’s abstract form bears a relationship to the fluorescent lighting, vertically-hung window blinds, and the angularity of storefront window display architecture. The paintings are the latest and largest of an ongoing series, the flawless atmosphere of sunset and vertical stripe motifs long being a presence in Basher’s work.

The exhibition will also feature sculptural works made with fluorescent lights and architectural aluminum window trim. Arranged in vertical series like the stripes of the paintings, the lamps will cast the show in a high-spectrum artificial luminescence that is at once confrontational and blindingly seductive. Their industrial materials give reference to the modernist canon, while the scale and shape of the work gives nods to shop fittings.

In both paintings and sculptural works, the light and tenor of retail commerce is concentrated and focused to a destabilizing degree. These elegant paintings and objects may be interpreted through a critical lens concurrently as utilitarian display objects, and refined, meditative artworks.

New Zealand-born Basher divides his time between New York and Auckland, New Zealand. He received his BA in Fine Art (2003) and MFA (2008) from Columbia University in New York.